Lausanne, Switzerland, December 31, 2011 – An annual poll in Cuba has once again selected volleyball as the best team sport in Cuba for 2011. 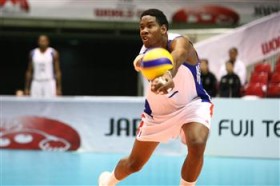 Wilfredo Leon in action during the World Cup in Japan

The men’s squad were honoured in the team sports section, while Wilfredo Leon and Yoana Palacio were voted the most outstanding players in the individual honours.

The women’s and men’s teams both earned silver medals at the XVI Pan American Games in Guadalajara, Mexico, in October. The men’s side also won the gold medal at the NORCECA Confederation Continental Championship in Puerto Rico, which qualified them for the FIVB World Cup in Japan. In that event they placed fifth, while they were eighth in the 2011 FIVB World League.

Leon was named the Most Valuable Player of the continental tournament in Guadalajara, while Palacio took the same honour in the women’s tournament. She was also the competition’s best spiker.