Vienna, Austria, December 30, 2011. The 2011 MEVZA Youth and Junior Championships were completed today in Maribor (Slovenia) and Kecskemet (Hungary) respectively with titles eventually going to Slovenia, the Czech Republic and Austria. 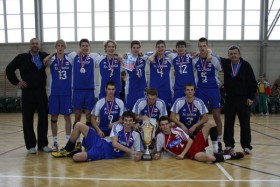 Slovenia’s girls took gold at home in Maribor by edging Croatia 3:1 (25-16, 25-9, 21-25, 25-8) in the final game of the Championship that was open to players born in 1996 and thereinafter. The event was joined – upon a special invitation from the MEVZA – also by the national teams of the Netherlands and Israel that eventually settled for third and fourth.

Hungary rounded out the MEVZA podium after cruising past the Czech Republic with the score of 3:1 (25-18, 25-23, 21-25, 25-18). Austria topped the final standings of the boys’ competition in Maribor after defeating the home guys 3:1, being paced by top scorer Paul Buchegger.

“This is an outstanding result” says the President of the Austrian Volleyball Federation, Peter Kleinmann.

“Our wins over strong teams like Slovenia, the Czech Republic or Slovakia confirm the quality of the work we have been doing. The tournament was also a unique experience for our young players” he adds. The final match was basically over after Austria easily clipped the third set to stretch momentum also in the last section of the game. The podium of this tournament – open to players born in 1995 or younger – was completed by Slovakia.

Slovenia came out on top also of the junior women’s Championship that ran in Kecskemet but the final match with the Czech Republic was absolutely breathtaking, with the Slovenian celebrations starting only after the final 16-14 was stamped on the scoreboard at the end of a thrilling tie-break.

Bronze went to Slovakia at the end of a five-setter where Austria ran out of fuel (7-15) after going for the provisional 2:2. The Czech Republic took its revenge in the men’s final – addressed to players born in 1993 or younger – where the group around head coach Petr Juda (pictured) scored a convincing 3:1 after Slovenia had taken the opening set. Slovakia claimed another bronze medal to complete the podium via a 3:1 win over Austria.

RWANDA – Volleyball was most outstanding sport...