Schwerin, Germany, December 30, 2011. SCHWERINER SC head coach Teun Buijs draws the line at the end of the year 2011 and talks about his experience so far in the 2012 CEV Volleyball Champions League. 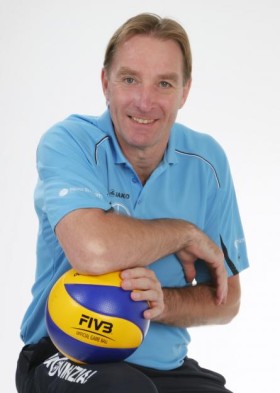 Mr. Buijs, this is your first season as coach for SCHWERINER SC. What is your impression of the city and its people? What do you miss the most of your home country, the Netherlands?

Schwerin is a beautiful city with 7 lakes around it. The nature here is very nice and quiet. The people of Schwerin love Volleyball, so it’s not so difficult to live here. What I miss the most is my family and the city of Amsterdam.

Looking back at 2011, what were your highlights personally and in Volleyball?

The last year I was working in Bottrop (a club competing in the first division of the men’s Bundesliga) being quite successful with the team. With a low budget we finished sixth in the league and reached the semifinals of the national cup. This was certainly a highlight of 2011. In Schwerin I was able to coach a Champions League team for the first time. That was definitely something special to me.

What are the advantages and the disadvantages to have your daughter Anne in your team?

Of course it helps that we speak the same language. But we also speak the same Volleyball language. We understand Volleyball in the same way. But for the team she is just a regular player like anybody else. And being her coach I have to say she is a very good player and so it’s better to have her on our side.

Unfortunately, you are still waiting for your first win in this Champions League season. What is the main difference between the level of play in the Champions League and the one in the Bundesliga? And what conclusion do you draw from the first games in Europe’s most elitist competition?

I have been working for 4 months in Schwerin and slowly the game I want to play starts coming. Because of the busy schedule we have, there is not much time to practice. But already, the team is playing at a higher level than it was when we had our first practice 4 months ago. In the Champions League there are a lot of players that have already played many international top games, be it Champions League or tournaments with their national teams. Meaning, they have a lot of experience. That’s what we have to compensate with our fighting spirit. The level of play in the Champions League is very high, but if we adjust to that we will definitely have an advantage in the Bundesliga.

What are your goals for 2012, personally and in Volleyball?

I want to improve myself every day. And of course I want to win trophies with my team.

SYNONYM FOR LOYALTY: Busra Kilicli – “I...

EXCLUSIVE: Ivan Miljković – “Firstly, I will...

INTERVIEW: Vlado Nikolov for WoV – “Our...