Schwerin, Germany, December 31, 2011. SCHWERINER SC middle blocker Berit Kauffeldt draws the line at the end of a busy year and discusses her experience so far in the 2012 CEV Volleyball Champions League. 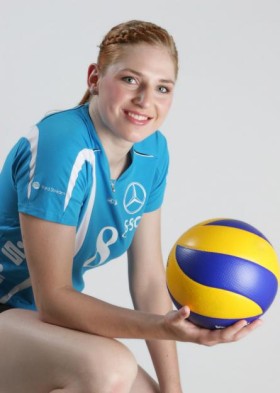 2011 was quite a successful year for you winning the Bundesliga and being runner-up at the CEV Volleyball European Championship with Germany’s national team. Looking back, can you recall your highlights and what was the most emotional moment from the past 12 months?

Personally, it is always something very special to win the national league because you work for that all year long. Yet, also the European Championship turned into a great experience because it was the first time I was playing at such an important international tournament. Even though I only played for a few minutes it was amazing being part of that adventure.

The success with the national team, winning the silver medal at the European Championship, was rather unexpected by most experts going into the tournament. What was the reason for the upswing of the national team? And what kind of impact does its success have on Volleyball in Germany and on the Bundesliga?

I think the upswing didn’t start this year but already during the past few years. We worked hard on our game and now we were rewarded for that. One important detail is the team spirit which is just extraordinary. The success of the national team helps German players get good contracts abroad but it also helps get good players from abroad to Germany which makes the Bundesliga more and more competitive and attractive.

How do you see your chances to retain the national league at the end of this season?

Certainly, this is our goal and a realistic one as well. We play the regular season and then the Playoffs become crucial. A mixture of ability, fitness and of course luck will be the decisive points in the Playoffs. But I think we have it all to be successful this season too.

Despite the losses in the Champions League so far, what does the team take from the games you play in Europe’s most elitist competition? What does it mean to you personally to play that stellar competition?

These are very special games for all of us. Most of us play at that level for the first time. We have been assigned to a very good group with great teams. And so it is fantastic to play against some of the best players in the world. This reminds us of where we stand and where we want to be; it is a great experience for all of us. Of course, with the national team I also play at the highest level but so far I only got little playing time. So personally it is great to actually play many games at that level and learn from this opportunity.

Before the start of the Champions League, which away trips were you looking for the most and why?

I was most looking forward to going to Cannes. On one hand they have a superb team and on the other hand my favorite player, Milena Rasic, a Serbian middle blocker, is playing for RC CANNES. In addition, I have been to the Cote d’Azur once and it was so beautiful there. So I was happy to return and see the city of Cannes with all its beauty.

Baking is one of your hobbies. Did you bake a special cake for your team mates for Christmas?

Everyone was well treated with cookies and Christmas dinners by their families. So there was no need for me to bake. However, I always bake a cake if it is the birthday of someone from the team. Anybody can request a special cake for their birthday and I see what I can do.

What are your goals for 2012, personally and in Volleyball? Where to start?

Well, I would like to get to the German Cup final and win it in March. Defending last year’s title in the national league and winning the crown again would definitely be something very special. Personally I would really like a dream to come true: going to London next summer and play at the Olympics. That would be the biggest thing. If these three modest wishes come true, I would be very happy.

World Of Volley Team Wishes You