Bruno Romanutti has arrived to the National Team of Argentina with a few international matches on his account, but also being the best spiker of the Argentinian League 2012/2013 where he replaced historical Marcos Milinkovic in Buenos Aires Unidos. Javier Weber gave him the opportunity to gain experience with Argentina. 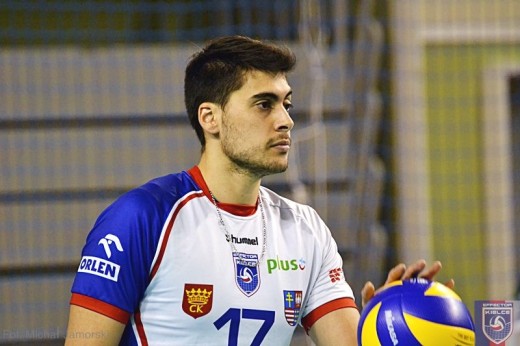 The 24 years old player started from the bench but suddenly appeared in the court. In the 4th match of the World League against Brazil, he replaced Ivan Castellani and scored 12 points becoming the top scorer of his team and the second of the match with only two sets played. On a difficult match, he showed he was ready to play at international level, but had to wait a little more to be in the first squad of six players.

Then, Argentina visited Bulgaria and Romanutti was the top scorer again. From that on he continued growing so fast: in the game with Poland that his team lost 3-2 he was going to get the best mark of an Argentinian player in the last two seasons with 23 points. The great performances of former Puerto San Martin player weren’t accompanied by victories, but that didn’t overshadow his potential.

After that, things went bad for the National Team and Romanutti’s level decreased a little, Weber started to change him and Castellani so often. That Weber’s move also affected the rest of the crew, so the Argentina was eliminated from the World League, with only one victory over 12 games.

The South American Championship had a similar development: he played three of four matches, with a good performances and obtained the second place after the lost with Brazil. That gave Argentina the chance of playing this year’s World Cup, but that will be another story, since the National Team is in a period of changes and doesn’t have a coach yet.

However, the career of the player born in Rosario didn’t end there: his good performances in the World League, especially against Poland meant a contact with Effector Kielce that was going to hire him to defend the colours of this Polish team. He travelled to Kielce where he was going to share the experience with his friend Cristian Poglajen.

While the team was getting ready for Plusliga, the two Argentines had fun and shared their experience from Poland: foods, home haircuts, trips and games, a good way to get adapted to their new lifes. But that wasn’t all: Romanutti was surprised by the love of the fans. He was almost and idol among the teenagers that filled the stadiums with posters and shouts for him. Bruno shared that love with happiness and always took time to give them back the affection.

The start of the competition wasn’t as expected; Kielce lost 3-0 with AZS Warsow on the debut and then suffered another defeat in the second round. Only in the third round, they got a victory over Lotos Trefl Gdanks and continued that way in the following games. Bruno played only a few sets and contributed with some points every time he was at the court.

In the sixth round, he was finally in the line up and scored 13 points for the win of Effector over Cerrad Czarni Radom. He continued increasing his level, and scored 16 units in the following game. The results weren’t good for Kielce that had to wait until the last round of the year to break the losing streak. They won 3-1 over BBTS Bielsko Biala with another good performance of the opposite.

ARG: Cordoba qualified all its teams for...