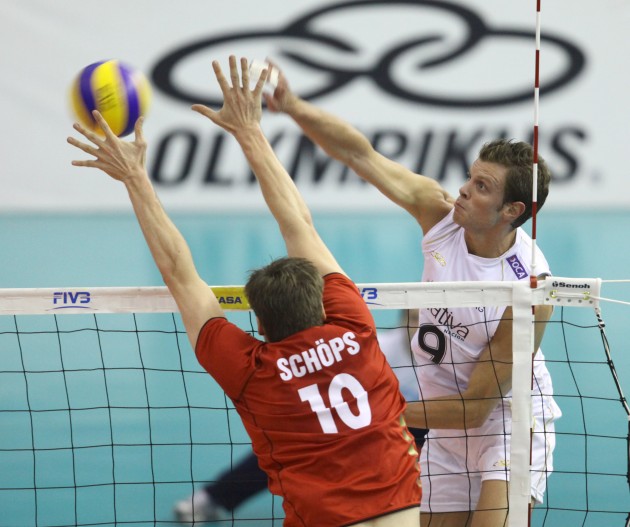 The top scorers were Federico Pereyra from Argentina and Germany’s Jochen Schops with 17 points apiece.

The freezing temperature outside the arena was in sharp contrast to the warm atmosphere enjoyed by the 3,900 fans inside. A close start included Facundo Conte’s first ace to put Argentina 5-2 up, but Germany fought back to 5-5 and moved into the lead with a Denys Kaliberda spike. Federico Pereyra levelled the scores at 9-9 and when Argentina took a 10-9 lead, Germany coach Vital Heynen requested his first timeout. Christian Dunnes leveled at 12-12. The lead changed several times, but with the score at 15-18, Argentina coach Javier Weber called his players off court. Germany’s momentum carried them to 22-17 when Argentina used their second timeout. Sebastian Schwartz brought up the first setpoint and then closed out the set.

After an even start to the second set, Conte’s blocking saw the hosts 8-5 ahead at the first technical timeout. Schops responded with two blocks and the scores were level at 8-8. The encouragement and shouting of the crowd never stopped as the game became tight. Germany managed to go two points clear at 14-12, when Weber used a timeout, but it remained close and a Pereyra ace made it 18-18. After Argentina pulled back to 23-23, Heynen requested a timeout and the Germans took the next two points to seal the set.

The match found both teams with a different reality at the start of the third set – the visitors were looking to finish things off while Argentina needed to force a fourth set. Germany got a two-point lead at the start but Pereyra blocks helped Argentina draw level at 5-5. Argentina were two points clear at the first TTO, but it was all-square again at 9-9. Germany moved into a three-point lead at 20-17, prompting Weber to call his players off. Argentina responded to lead 22-21, when Germany called a timeout. After a bad serve on both sides, Germany closed the match out.
On Sunday, Germany face Bulgaria in the first match while Argentina will do battle with Portugal in the second match.

Argentina: The four teams were highlighted in...