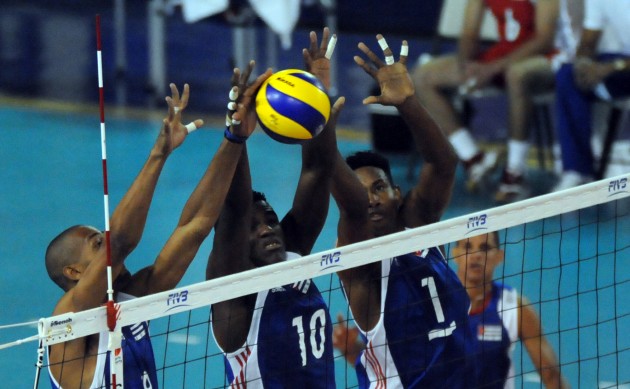 The victory raised Cuba’s win-loss record to 4-1 for 11 points while Serbia dropped to 3-2 and nine points.

Cuba’s Wilfredo Leon was the star player of the match with 15 points including four aces and one block. He was followed by Rolando Cepeda and Danger Quintana with 12 and nine, respectively. Yenry Bell and Isbel Mesa each contributed eight points. Serbia’s Sasa Starovic and Uros Kovacevic scored 12 and 10 points, respectively.
Cuba won the battle of blocks 10-8, with Quintana and Mesa each registering four, and outscored their opponents 10-1 in the aces category.

Cuba jumped to a 6-2 lead when Quintana blocked Mihajlo Mitic and Leon followed with an ace. Serbia coach Igor Kolakovic called for time-out. When play resumed Leon unleashed a blistering serving ace and Cuba led 8-3 at the first technical timeout. At 9-6, Cepeda hit two consecutive spikes. Kovacevic scored with a soft touch and Bell responded with a cannon shot. Mesa served an ace for a 13-7 Cuban advantage, but Bojan Janic reduced the margin to 13-9 with a cross-court smash. The second TTO arrived with Cuba leading 16-10. Lefties Cepeda and Starovic traded spikes and Cuba made a defensive error to cut the difference to 20-15. Milos Terzic then netted a serve. Fernando Hernandez came off the bench to hit Cuba’s fourth ace, while Leon and Starovic traded big spikes. Cuba won the set 25-19 with a disguise attack by setter Diaz.

At the beginning of the second set, Mitic blocked Cepeda and then scored with a touch to break a 4-4 tie. Kovacevic provided two spikes in a row for an 8-4 lead in favour of Serbia. Bell blocked Starovic and Diaz served an ace. Kovacevic’s attempt touched the antenna and the score was tied up at 8-8. Leon came up with a huge spike from the back court but Kovacevic tied the scores again. Kovacevic gave Serbia a three-point lead at 12-9. Bell delivered a big spike and Mesa blocked Srecko Lisinac. Leon followed with a terrific shot and Cepeda hit another bomb to even up the scores. Leon and Kovacevic traded kills and Starovic served into the net for a one-point Cuba lead at the second TTO. Leon began the action again with an ace. Serbia equalized after Rasic blocked Bell. Mesa added a couple of blocks to give Cuba a 21-18 margin. Leon and Mesa scored two more blocks for set point at 24-19 and Bell served another ace to close.

Cuba had an 8-4 lead in the third set as Leon served his fourth ace and Cepeda provided two massive spikes. Mesa blocked Kovacevic and Leon followed with a superb spike. Quintana blocked Lisinac for a six-point margin at 12-6. Bell hit a rocket, but two consecutive blocks by Terzic and Starovic reduced the gap to 14-10. Rasic blocked a soft shot by Leon. Quintana and Cepeda combined for spike and ace to give Cuba a 16-11 lead at the TTO. Starovic kept Serbia in the match with consistent attacks. At 21-19, Cepeda was called for invasion at the net, before scoring with a cross-court smash. Leon hit another big blow for 23-21 but Starovic answered back. Cepeda planted a bomb for matchpoint at 24-22. Starovic came back again but Leon closed the match with a big kill.