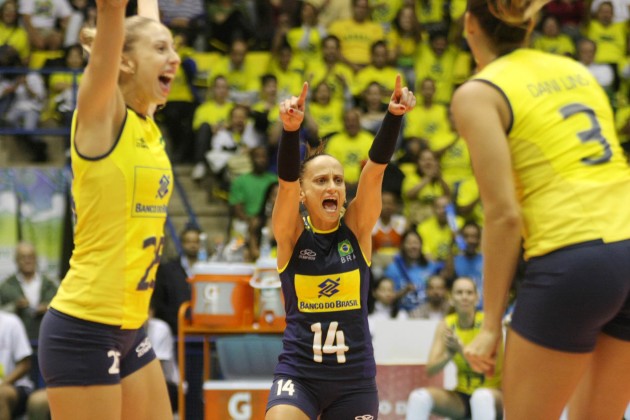 With its fifth win in the annual tournament, the world No. 2 team now has 11 points and is in fifth position. Italy, which has only won one out five matches so far, now have five points and are 11th in the standings.

Italian receiver Francesca Piccinini topped the scorers with 25 points. She was supported by Serena Ortolani (17) and Lucia Bosetti (18), while Brazil’s Sheilla Castro had 19 and Thaisa Menezes 15.

Italy started the match better and led 8-5 before the first technical timeout. The Europeans’ lead increased to 17-13 after a Brazilian mistake. The hosts scored three points in a row, but Italy managed to escape again. With the Italians leading 24-20, Brazilian coach Jose Roberto Guimaraes used Dani Lins, Mari and Priscila Daroit and they helped their team turn things around, with debuting Daroit earning a serve point and making an amazing dig. Mari spiked twice before Jaqueline won a disputed call at the net to close the frame 26-24.

After an even start, Italy took control of the second set in the middle of the frame, with Ortolani serving powerfully as they went ahead 15-11. A block over Paula improved the Europeans’ lead to five points. Making several mistakes, the Brazilians could not react and gave away easy points. A quick spike by Sara Anzanello sealed the set for the Italians 25-14.

The hosts recovered and scored the first three points of the third set, prompting Italian coach Marco Bracci to ask for an early timeout. Playing its best volleyball in the match so far, the Brazilians eased into a 12-6 lead with Thaisa blocking Piccinini. A block point by Jaqueline put Brazil close to the win, which was confirmed with a Thaisa service.

Italy improved its transition game in the beginning of the fourth frame and went to the first technical timeout ahead 8-7. Using their blocking power, Brazil recovered to take control, with Fabiana dominating the net. A technical spike by Bosetti put the Europeans in the lead again, but an errant shot by Ortolani tied things up at 21. Finally, an Anzanello block levelled the set score at 2-2.

In the beginning of the deciding set, Brazil played better and led 6-3 with a backcourt spike by Jaqueline. Italy tied the frame at 13-13 with a good block by Raphaela Folie, but Brazil was effective in the following points and Paula spiked to make the score 16-14 and close the match.

Brazil will play its last match at home in the 2012 World Grand Prix on Sunday against the similarly unbeaten United States. The Italians will try again against fellow Europeans Germany.