China scheduled a 2015 final rematch against Thailand in the semifinals of the 2019 Asian U23 Women’s Volleyball Championship in Hanoi, Vietnam. Note that the reigning titleholders Japan do not participate in the competition this year. 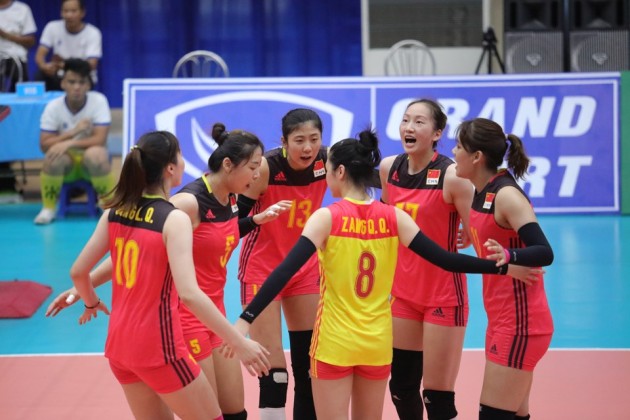 China is one of the two teams that did not suffer a single defeat in the 3rd edition of an Asian U23 Championship on their way to the semifinals. They had 2-0 in Pool C, 3-0 in Pool E in the Top 8 (topping both pools) and now have a win in the quarterfinals against neighbors Hong Kong by a 3-0 (25-15, 25-13, 25-12). China did not even give away a single set, so far. In the absence of some of the key players who were rested by the decision of the head coach Wu Sheng, including the major star Wu Han, Zhong Hui was China’s most prolific player against Hong Kong. The outside hitter of Shanghai scored 16 points. In the semis, China will face Thailand who downed Chinese Taipei in straight sets.

Whenever Taipei were breathing down Thailand’s neck, Pattiya Juangjan came to the scene to reject the rivals. The outside hitter of the country’s titleholders Generali Supreme Chonburi-E Tech finished with a game-high 17 points. Thailand vs. China in the semis will be a rerun of the final from an inaugural edition of the Asian U23 Champs, in which China prevailed by a 3-1.

North Korea is the other team, along with China, that has a perfect record in the tournament, so far (6-0). They ran over New Zealand in straight sets, leaving rivals in single digits in the first set: 25-8, 25-17, and 25-19. Son Hyang Mi put down 12 points for the winning side who will play the hosts Vietnam in the semifinals.

The nearly packed stands at the Gia Lâm Gymnasium in Hanoi (2,000 spectators) saw their beloved players struggling but prevailing over Kazakhstan in 4 sets with Đặng Thị Kim Thanh tallying 21 points. The member of the national champions VTV Bình Điền Long An also highlighted Vietnam in a win over the Maldives that stunned the Volleyball world, a few days ago. Vietnam will play semis for the second successive time in the tournament. Both sides were undefeated prior to the Top 8: Vietnam led Pool A with a 2-0 record, while Kazakhstan topped Pool D with a 3-0). They could not repeat the same in the Top 8 as Vietnam finished second-placed in Pool E (2-1), while Kazakhstan finished third-placed in Pool F (1-2).

WCH U20 W: Huge comeback of Russia vs. Italy pushes them to semis, Japan play like fury