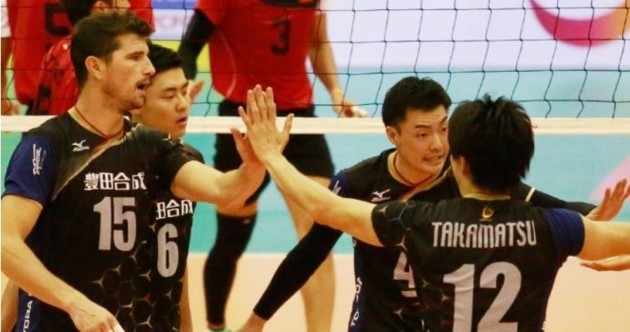 Japanese Toyoda Gosei Trefuerza cruised past Kazakh representatives Altay VC, who were undefeated in the tournament until this game, by a 3-0 (25-16, 25-22, 25-22), in the semi-finals.

Led by Croatian opposite Igor Omrčen, who established himself a legend of the club as he started his fourth season with the V-League club, Trefuerza became only the second team from Japan to advance to the finals in the history of the tournament and a first team from its country to do so in 16 years (Suntory Sunbirds lost to Korean Samsung Bluefangs in 2001, in Shehong, China).

In the other semi-final, which was a rematch of last year’s finals, reigning champions Sarmayeh Bank of Iran eliminated strong side of Al Arabi SC Doha from Qatar, easier than expected 3-0 (25-23, 25-17, 25-19). Even the stars of world volleyball like German György Grozer and Cuban Salvador Hidalgo could not help Al Arabi advancing to the finals as they were outplayed by Milad Ebadipour, Farhad Ghaemi, Shahram Mahmoudi and other Iranian NT highlights, on the other side.

SUI W: Akinradewo will have worthy replacement in Volero – a compatriot from Stanford University