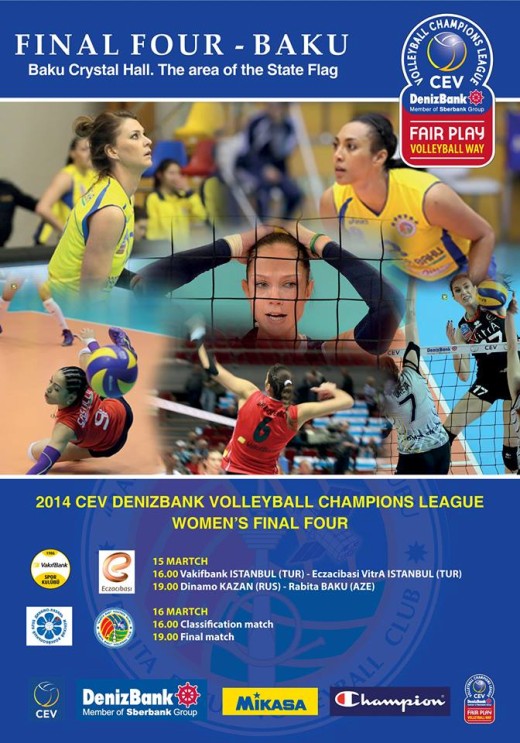 Turkish derby will open the Final Four. The defending champions Vakifbank is ready for another title, but Eczasibasi won’t surrender.

They met each other three times so far this season. Guidetti’s team took 3-2 win twice, while on November 7th the result was 3-0 for Vakifbank. So, there is no doubt who is favorite in this match…But, it means nothing. Vitra wants revenge! The match will start at 16:00 local time (13:00 CET).

In another semifinal match, Rabita will host this year’s finalist of Russian Cup, Dinamo Kazan. As we know, in last season Rabita knocked out the girls from Kazan in finals of Champions league Play-off and advanced to the Final Four. Now, Dinamo will have even more difficult job, to beat Rabita in front of their crowd…

What Rabita wants? They want trophy, because they lost last year’s finals. Vakifbank was better in straight sets. So, Rabita will do anything to meet Vakifbank in finals again! It’s time for revenge. The game will start at 19:00 local time (16:00 CET)

The winners of this year’s CEV Denizbank Champions league will join host club Volero Zurich and Brazil’s SESI-SP who won the 14th edition of the Women’s South American Club Championship in February at the World Club Championship event.

If you want to watch these games, check out our article Final Four Tv, live streaming, photos…

PHOTO OF THE DAY: Sleeping with tiger

BUL CUP M: What a surprise! Marek Dupnitsa knocked out by Dobrudja