Sollys Osasco defeated the last team in the Superliga standings Sao Bernardo 3:0. Now they are second, behind Praia Clube. WorldofVolley brings you the latest volleyball news. 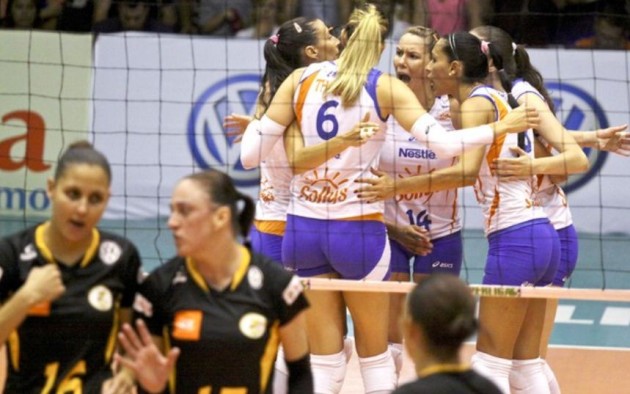 Sao Bernardo started the match without fear from Osasco force, and remained focused on looting and counterattacks to play a balanced game until the end of the set, more precisely to 19-19. Until that time, neither team had managed to open more than two points at any time. But when Jaqueline put Osasco in advantage, and won the set 25-20.

In the second set, Sao Bernardo opened up early 4-1. Osasco then turned around the result 9-6. Later in the game it was 20:14 for Sollys. And when it seemed Osasco would quickly finish the set, Sao Bernardo came to 20:18. But at the crucial moment of the game, hey felt the pressure and Osasco closed 25:20.

The third set was a real ride for Osasco, which opened the set with the incredible 13-0 on the scoreboard. Later it was just a matter of keeping their lead, and won 25-12.