Tournament leaders Brazil maintained their 100 per cent record in the FIVB World Grand Prix Finals on Saturday with a 3-0 (27-25, 25-21, 25-22) win over Serbia at Hokkaido Prefectural Sports Center. Brazil coach Ze Roberto said his Serbian counterpart had ruined his plans. 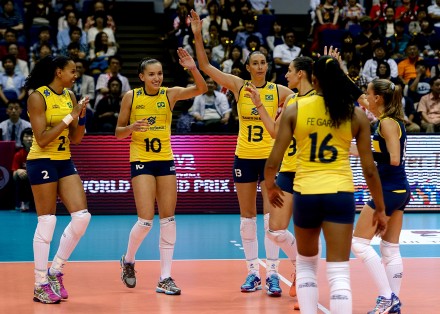 Brazil stayed perfect in the Finals

Brazil coach Ze Roberto: I’m very happy about the game. Zoran changed all my plans. We studied to play with another seven players but he changed all the players, so in the beginning we were a bit confused, but after that we adjusted and I was very happy with our block. It was important to win this match and to come to the final match against China. We have a very important match tomorrow. I think China are stronger than at the Olympic Games. I think the key for China is the No. 2 Zhu Ting. The left-handed player (Zeng Chunlei) played very well, too. And the setter and the middle blockers did a good job. They have a very strong team right now. It’s going to be difficult to beat them but we have to try; the World Grand Prix is very important for us.

Brazil captain Fabiana Claudino: I feel really happy. At the start we lost the timing of the block but as game went on we got it back. I’m happy to win the game.

Brazil No. 13 Sheilla Castro: Both teams had a well-balanced match. Serbia’s players were different from the ones we had expected so we lost concentration at first, but overall we had a really good match.

Serbia coach Zoran Terzic: I’m very glad we played a good game today. Maybe it was a little surprise for me because we played with seven new players compared to three games before. I’m really sorry we didn’t get a set or more but we had our chances. In critical moments teams like Brazil have a lot of experience and play very well. But I’m still satisfied. After the World Grand Prix we have only one day of rest. After that, we need to go to Germany for the European Championship, so this is the main reason why we played with a different seven players today. We need to keep our team in good shape for the European Championship.

Serbia captain Maja Ognjenovic: We started in good condition, especially the first and third sets were really good. I don’t know why we lost the first set. Tomorrow, we play Italy and it will be our most important game. If we win, we can get a medal.

Memorial of Platonov: Group stage – Zenit out of semifinals

BRA M: Stop everything, we have save...