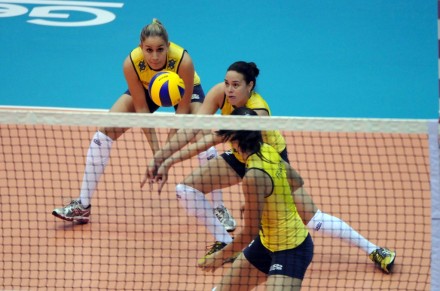 Mara Leao and Gabriella Souza were the top scorers for the South American team with 12 points apiece, while Glauciele Silva scored 11. Captain Ellen Braga finished with 9 but was the top server with 4 aces.

Germany had some injury problems with their captain Jennifer Geerties and Katharina Schwabe who didn’t play on Tuesday. Saskia Radzuweit took the control of the team on the court, while Carina Aullenbrock finished with 17 to be the best player of the match.

However Brazil had a dominant block strategy surpassing Germany 14-5. The service game was 7-3 also for the South Americans who capitalized 23 error-points given by the Europeans.

Brazil will face USA on Wednesday and Germany will play against Cuba.

BRA M: Funvic Taubate will be much...