Brazilian queens are the owners of FIVB World Grand Prix 2014 crown! Ze Roberto’s team had a great performance against Japan 3-0 (25-15, 25-18, 27-25). They needed to win in three or four sets and they did it! It was the real blocking party, Japanese players were powerless. 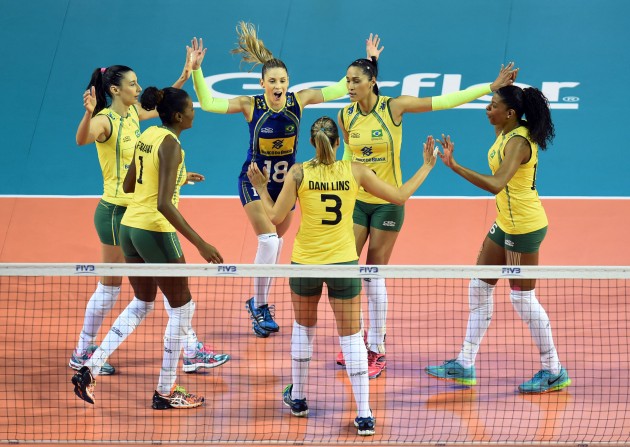 Although Brazil started tournament with defeat against Turkey, they managed to score four consecutive wins and to take gold medal!

Brazil opened game better than the rivals. At the first TTO, Ze Roberto’s team had a lead 8-5. After the break, the girls in yellow jerseys increased the lead. Thaisa scored a point from zone 3 for 12-8.

Garay did a good job by blocking the rival’s receiver and after Fabiana’s point Brazil had 18-11 lead. It was obvious that Japanese girls couldn’t take the first set. After amazing action of Brazilian players, Fe Garay took the point for Brazil’s lead 1-0 (25-15)

Brazilian blocking party continued in the second set. Ze Roberto’s team again opened the set much better than the opponent – 5-1. They kept the lead and even increased it (12-6).

After Manabe’s advices, Japan came close to 14-12. Ebata’s point gave Japan the 13th point (14-13). The second TTO gave Brazilian girls power to increase the advantage again 20-15. There was no time for comeback of Japanese girls. Brazil was one set away from win, 25-18.

For the first time in this match, Japan had a lead, 3-1. But, Brazil reacted well and managed to tie score, 5-5. Fabiana’s spike gave advantage to Brazil again – 6-5. At the first TTO, Japanese girls had one point of advantage 8-7.

The setter of Brazil Dani Lins and middle blocker Fabiana made two blocks and Brazil had two points of advantage at the second TTO.

After the second TTO Fabiana made another block for 17-14 lead. Takada’s two aces gave Japan 17-17 score.

Brazilian girls managed somehow to take two points for 21-19 and Manabe had to react with time-out.

Ze Roberto’s squad had the third match ball, Japan saved it again! Jaqueline Carvalho was the key that unlocked Japan’s defense for the Brazil’s tenth World Grand Prix title in its history – 27-25.

Congratulations to Brasil, they have deserved to be the champions. Japan, what a pain to watch. When Japan plays, I feel that big girls smash the little girls. Setter of Japan barely reach the net and practically she has no block at all. This is volleybol, not tennis or ping pong. Japan has veeery little margin to make errors in receiving, defense and attacks. That makes to support them painful. They need to find some taller girls like Saori.

If so, how did Japan defeat Russia,China and Turkey once they are all taller them Brazil?

Japan has almost perfect volleyball regarding their physical situations. However, at home, championship match and they are 0-3. It is all about concentration. Japan has no chance against full squad, concentrated teams of Brasil, USA, Russia and China for the time being, Even in front of their home crowd. For us, we are not still used to play against low block, ping pong style volleyball. We do not see this style a problem yet, we focus more on playing against Russian style or Brazilian style of volleyball.