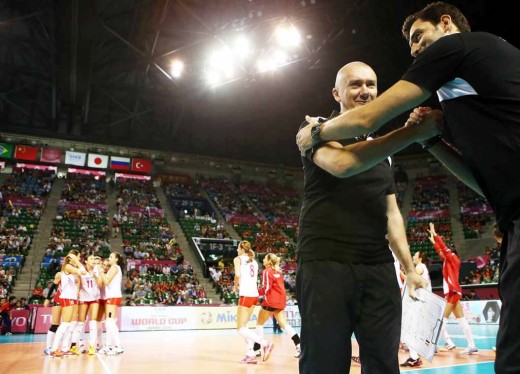 “Congratulations to Gert, not only for this tournament but for all the work he’s been doing with Belgium. I think they are one of the more interesting teams at the moment. And congratulations again to my team, not only for the victory today but for the wonderful World Grand Prix that we have played. We finished on the same points as Russia and I think we did very great things. Apart from China, we beat the best teams in the world – Brazil, Italy, Russia, Serbia, Japan, USA – so we must be really happy with that. For me, it’s been a great experience and I want to thank Japan; every time, it’s a great pleasure to come here.“

“We are so happy to win against Belgium. They are a good team and they showed their quality in the last European Championship when they took the bronze medal. Congratulations to them, too; they fought hard to the end.“

(Re. influence of coach Barbolini):

“The Turkish team works with an Italian system so it wasn’t difficult to adjust and I worked for two years in the same club (Galatasaray). I think we have improved although we have changed many players from previous years. In this World Grand Prix, we have a younger team and we are training hard and doing our best to improve ourselves.“

“We end this tournament like we started it – winning one set – but I think we played better in recent days. Now we must start making our analysis – which are the strong points and the weak points – after playing against five world-class teams. We don’t have time to train because the World Championships start in three weeks. We will try to make a more balanced team; this is the main thing. This was a hard tournament for the team. It’s been a long time since we lost five games in a row, so mentally we must become fit again, and physically, too, because we had a hard fight, not only here but in the Final Four and getting to the Final Four. It’s a historic moment for Belgian volleyball but it’s a starting point for the future.“

“Congratulations to Turkey. I think my team started very well with good concentration. We had good service at the start and that enabled our spikers to hit and score. In the other sets, we were at the same level as Turkey but at the end of the sets we made little mistakes and this is the key – not to make such mistakes.“

Frankly, USA sgould have been in the finals instead of Belgium. USA would have changed the whole picture, especially the place of Japan. Anyway, I am happy with the Turkish volleyball, with a litlle more luck or a better schedule, we could have been in the podium. This is a very good experience especially when we lack an elite opposite in the roster. Barbolini should really think to include Dicle Nur Babat and if neslihan is out again, a solid opposite. Guldeniz, Seda, Meliha and Yeliz are not able to kill the ball against high caliber teams. We can not always survive with Neriman and Gozde in the World Championship.