Poland defeated Brazil in a five-set classic in Toronto, Canada on Friday in the opening match for both teams in the 2012 FIVB Volleyball World League. 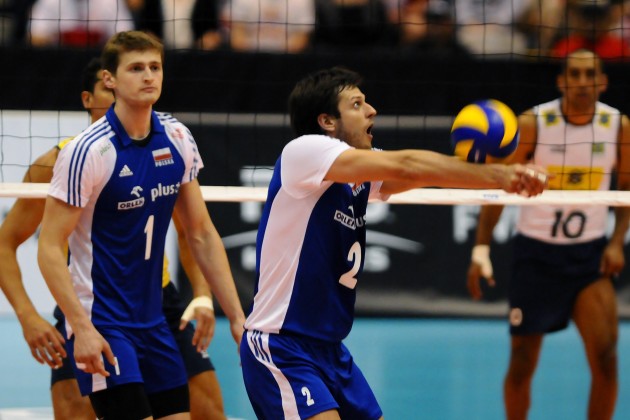 Poland’s Michal Winiarski bumps the ball as his side hold out for a sensational win over world No.1 Brazil

Poland went on an impressive 9-2 run to end the first set erasing a 20-16 deficit. While they demonstrated great power in attack it was their gentle play at the net that completely fooled the Brazilian players.

The second set also saw Poland claw back. Down 10-14 at one point, Poland climbed its way back to a 22-20 lead but squandered set point twice at 24-22.  A kill by Dante and a great block by Lucas off a Bartman attack sent the set to extra points.  Another extraordinary kill by Bartman gave Poland a 26-25 lead and Theo’s tip at the right side of net went off the antenna to end the set.

It was Brazil’s turn to make a late comeback in set three.  Lagging behind at 15-20, the Brazilians went on a 7-2 roll to tie the match at 22. Poland regained one point leads three times, including twice on Brazilian errors. Wallace destabilized Poland with a wicked serve then finished of the rally with a well placed hit to narrowly win the set.

It remained close throughout the fourth set and Poland seemed to have regained its stride as Bartosz Kurek scored on a kill and Jakub Jarosz tied the match at 18-18. Wallace continued to be dominant for the Brazilians however, scoring twice on blocks late on to take the match to a fifth.

Poland stormed out to a 8-3 led in the decider, but Siao‘s serving helped Brazil score five straight points to pull their European rivals back. The set capped a great match for Winiarski who scored three consecutive kills for Poland and delivered the winning point off the block from Sidao.