BRA M: END OF THE ROAD – The last game of Gustavo Endres

Gustavo Endres, a true legend of the Brazilian volleyball, admitted that he might played the last game of his career. 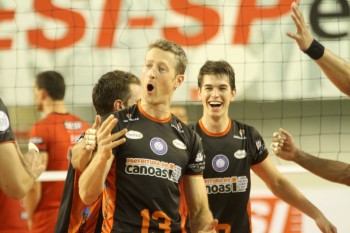 Gustavo and his teammates from Canoas lost the battle against Taubate, and therefore got eliminated in the quarter-finals of the Brazilian Championship. After the match, 39-year old middle blocker stated that he has not decided anything yet, but that he has probably finished his career.

“This was probably my last game. I want to stay in Canoas, take some role in the management and to help the team grow further. That is the plan…” said Gustavo.

Legendary middle blocker who won many trophies with the Brazilian National Team revealed which reward is the most precious for him.

“The gold from the Olympic Games in Athens 2004. That tournament is unforgettable for our generation. It was the peak of our team, and that medal has a special value for all of us.”

BRA M: Riad got stunned from this headshot (VIDEO)