Brazil downed their neighbours of Argentina in straight sets (25-19, 25-17, and 25-20) to open the programme of the 1/4 finals in the men’s volleyball tournament thereby making it to the Olympic semis for the sixth time in history. 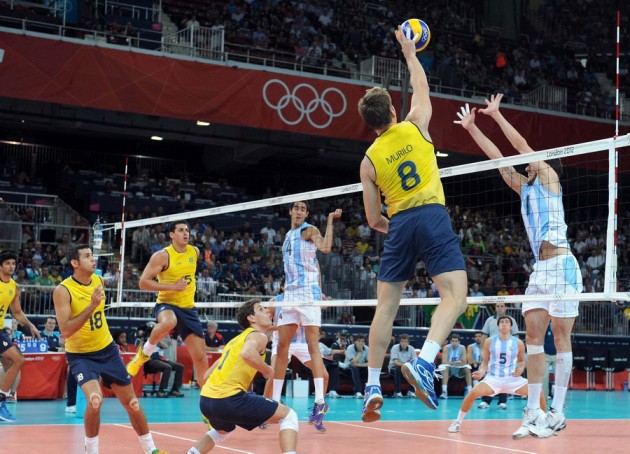 The group coached by Bernardo Rezende will be playing on Friday the winner of the clash starring Italy and USA later in the afternoon.

The triple world champions have embarked on a quest to emulate USA and Russia, i.e. the sole nations with three Olympic titles in men’s volleyball, to add more glory to an already impressive tally and a success story that started with a silver medal at the 1984 Olympics in Los Angeles. Brazil was paced by Murilo Endres with 14 points including 2 blocks well supported by Sidnei dos Santos Junior and Wallace de Souza with 12 and 11 respectively, while Facundo Conte was the only Argentinean player to finish the game in double digits (10).

World No.1 ranked Brazil moved ahead of their South American rivals, ranked world No.8, in the first set. Sidnei dos Santos Junior, Murilo Endres, Leandro Vissotto and Dante Amaral all showed their class. Pablo Crer, captain Rodrigo Quiroga, Federico Pereyra and Facundo Conte all spiked for Argentina, but they could not stay in touch. Brazil won the set 25-19, with the only down side being an injury to Vissotto.
It was more competitive in the second set as the score ran to 10-10. But Endres and dos Santos Junior began to dominate again and they took the set 25-17.
Brazil, who have not always looked at their best in the tournament, finished off the job in the final set. Conte, Crer and Quiroga fought hard for Argentina as it tied on 16-16, but Brazil’s all round blocking, spiking and defensive abilities were superior and they won the final set 25-20.

The injury to Vissotto, who has scored well during the tournament, will be the only worry as Brazil progress to the semi-final on Friday.