BRA M: Rezende selected 12 players for Rio – Murilo OUT, only 1 libero in the team!

After suffering a painful straight sets defeat in the World League Finals, Brazil head coach Bernardo Rezende have decided to immediately put the entire focus of his team on the upcoming Olympic Games. Therefore, he selected the 12 players that will play for Brazil at Rio tournament… 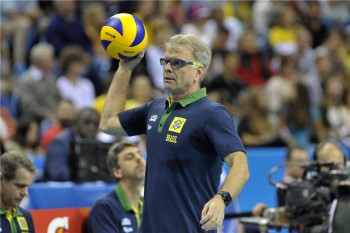 According to melhordovolei.com.br, Bernardo Rezende has decided to leave out Murilo Endres, Isac Santos and Tiago Brendle from the team that will compete at the Olympics!

Murilo and Isac are having problems with injuries, so this is the obvious reason why they will miss the Olympic tournament, while Rezende’s decision to cross out Brendle is quite interesting, as this player was the starting libero of Brazil in the Sunday’s World League finals against Serbia. Also, it means that Brazil will have only one libero at the Olympic tournament – Serginho!

This is the final roster of Brazil for the Olympic Games 2016:

RUS M: Andrey Voronkov has found himself a new club to coach…