The defending champions Sesc-RJ rose from the ashes against Hinode Barueri in the 2nd Round of the Brazilian Women’s Volleyball Championship Superliga.

Sesc were on the verge to suffer their first defeat of the 2017/18 season in Superliga as they trailed 2-0 in sets against the newcomers Barueri but, thanks to Drussyla Costa and Gabriella Guimarães Souza ‘Gabi Guimarães’, they managed to make a turnaround. The latter suffered the knee injury in the tie-break and was carried off the floor on which she has fallen screaming. Sesc reached 2-0 score while Barueri have the exact opposite record but they had a misfortune to bump into the two main title contenders in the first two rounds – Vôlei Nestlé/Osasco and Sesc. 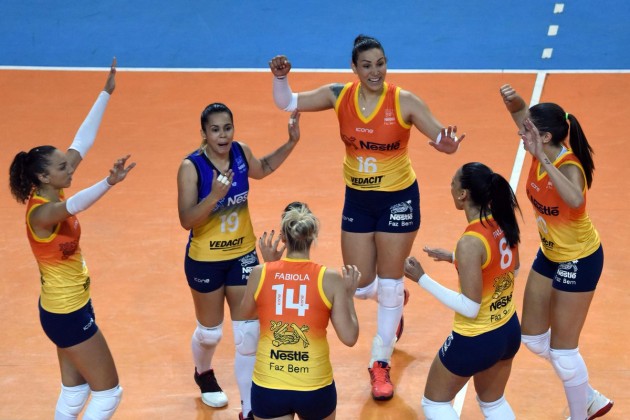 Osasco also achieved a five-set win in Round 2, making 16 kill blocks, to reach a 2-0 score in the championship. They emerged as the winners from a duel against Renata Valinhos/Country mostly thanks to Tandara Caixeta, who notched 27 points, and Ana Paula Borgo, who scored 21. Paula, who turned 24 on the day of the match, made some important points in the tie-break. Vivian Rodrigues collected 20 points for Renata.

Dentil/Praia Clube got a perfect 2-0 record in Superliga, too, as they downed São Cristóvão Saúde/São Caetano at home in straight sets. Amanda Campos and Fabiana Claudino scored 12 points apiece for Praia. Sonaly Cidrão scored 12 as well, but for São Cristóvão.

FRA M: Two youngsters boost Tours, one of them is nephew of world famous libero

ARG M: Bolívar’s starting setter for 2017/18 gets injured, their former player comes instead

BRA W: Even Fabi did not expect...