The Netherlands emerged victorious from a five-set spectacle against Spain on Day 4 of the 2019 CEV Men’s Volleyball European Golden League. 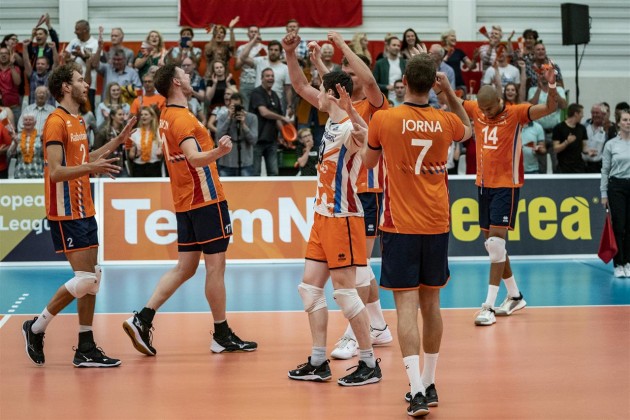 The match between the hosts, the Netherlands, and Spain was proclaimed the Match of the Day even before players of these two Pool B sides entered the court at Topsportcentrum de Koog hall. The Netherlands started the match on the right foot by taking the first two sets, but Spain’s fighting spirit gave them a 2-2. Still, the Dutch team, led on the court by Nimir Abdel-Aziz who delivered 33 points including 9 aces (!), prevailed in the tiebreak: 3-2 (25-15, 25-23, 22-25, 20-25, 15-11). Actually, it was the fourth tie-breaker for the Netherlands in as many Pool B matches as they now top the standings with a 3-1 record and 7 points. Andrés Villena scored 20 points for Spain wjho are the second placed in the charts with a 2-2 record and 8 points.

The Czech Republic beat Belarus in four sets, partially 25-21, 25-18, 19-25, and 25-23 in Pool C, with 15 points from Jan Galabov, making the pool highly competitive knowing that only one point stands between them and first-placed Belarus (both teams have a 3-1 record, but Belarus collected 9 points). Ukraine are still in the game for the top spot in the pool as they have 7 points and a 2-2 record, which is only one point behind the Czechs.

GOLDEN EL W: Austria stay in contention for 2nd place in Pool B, France close to falling into Silver League