A. Carraro Imoco Conegliano are the new European women’s volleyball champions, beating VakıfBank İstanbul in the tie-break of the 2021 CEV Champions League Super Finals in Verona. 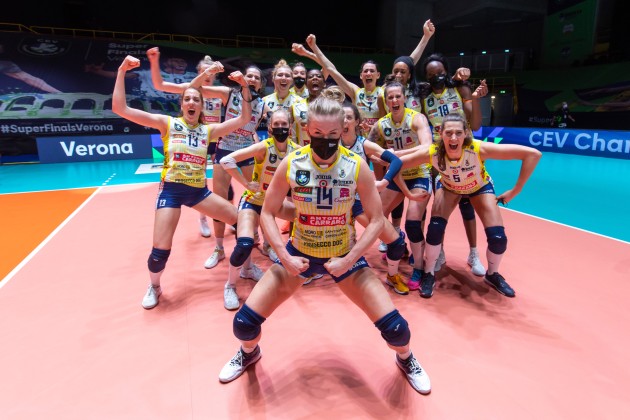 The extraordinary season of Italy’s Imoco ended triumphantly: in the 2021 Super Final on home soil in Verona, ‘The Panthers’ won the first Champions League in their history, beating Turkey’s VakıfBank in an incredible match, which was closed only at the tie break – following the video check of the last point – after more than two and a half hours of battle: 3-2 (22-25, 25-22, 23-25, 25-23, 15-12). This success crowned in the best way an incredible season of the team of Daniele Santarelli: not a single defeat suffered in any of the competitions (64 consecutive victories, lost on December 12, 2019, last time) and winning a historic ‘quadruplet’: Italian Championship, Cup, Super Cup, and Champions League!

Imoco had to chase the rival’s lead throughout the match (0-1 and 1-2 in sets), doing it without Miriam Sylla (out since the 2nd set). After VakıfBank were up 4-0 in the tie-break, it seemed that the title no.5 in the Champions League is smiling to them. However, Paola Egonu got on the loose at that moment scoring 10 points out of 15 for Imoco, and finished the match with a total of 40 points! As for the team commanded by Italian Giovanni Guidetti, it mostly relied on Swede Isabelle Haak (33 points).