LPR Piacenza did not want to risk anything in the second leg of the First Round of the 2017 CEV Men’s Volleyball Cup and went to Belarus with all available forces. It paid them off. 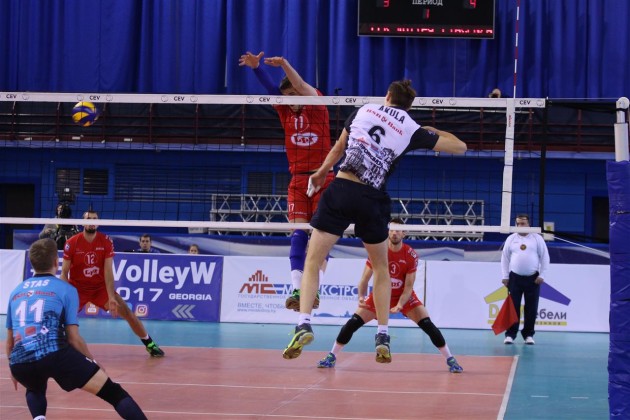 Serie A1 team got 3-1 win over Belarussian champions Stroitel Minsk at home in the first leg and suffered a slight scare in the second leg after losing first set. But, since Piacenza coach Alberto Giuliani brought all the best players to Belarussian capital, it had to give results. Finally, Piacenza again achieved a 3-1 (23-25, 25-14, 25-21, 25-20) win with 20 points from French Trévor Clévenot. Siarhei Akulich and Pavel Kuklinski had 11 each in Stroitel.

French representative Tours VB rejeceted all efforts of Slovenian Calcit Kamnik after winning first match 3-1. Tours lost 3-2 in Slovenia but these two sets were quite enough for them to advance to the 16th Finals. Stanislas Rabiller had his night with 26 points. Primož Vidmar had 14 in Calcit.

Besides Piacenza and Tours, these teams also qualified to 16th Finals in today’s matches: Hapoel Yoav Kfar Saba and Hapoel Mate-Asher Akko (Israel), Budvanska Rivijera Budva (Montenegro) and Novi Pazar (Serbia). Although it was played within term for the secon leg, KV Pëja (Kosovo) and Mladost Brčko (Bosnia and Herzegovina) met each other for the first time (3-2) since first leg was postponed.