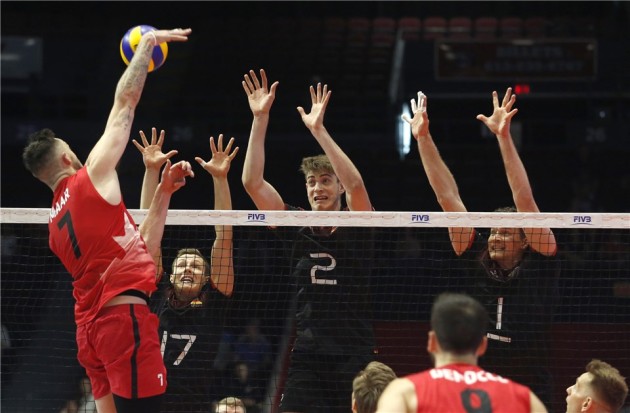 Germany have definitely gained a momentum and were able to celebrate their third consecutive victory in the tournament. Now, they will have the chance to close Week 3 with a clean sweep. Andrea Giani’s protégés scored a four-set win against pool hosts Canada, partially 25-23, 25-22, 20-25, 25-19, not being disturbed with a 30-minute delay of the game due to a broken elevator at TD Place Arena in Ottawa. Thus, Germany came to four points and two wins from top 5 in the standings. Despite winning the third set after coming back from a 7-point deficit (9-16) and being close to repeating a similar scenario in the fourth set, Canada was unable to extend their four-game winning streak. Simon Hirsch tallied 17 points for Germany while Stephen Maar scored 18 points for Canada.

Australia managed to scare the United States by clinching the opening set but after seeing a red flag warning, John Speraw’s guys shut down “Volleyroos” in the continuation of the match. But it was never easy. The U.S. team had to shift into turbo at the middle of the second set at 11-13. In the third set, they went on an 8-1 run at 5-8. Everything clicked well for the United States in the fourth set which they opened with a 10-0. 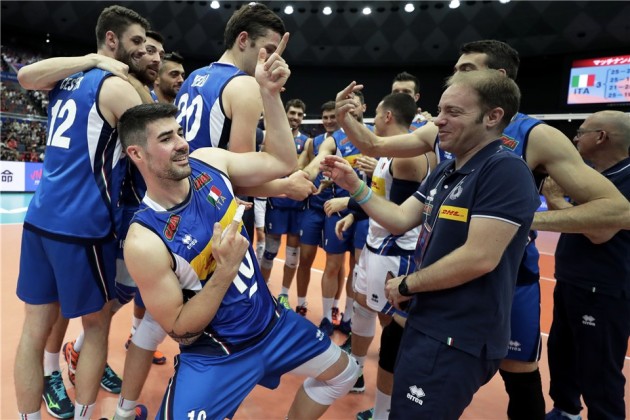 Due to the several different time zones in which the tournament is played, it happened that the second day of Week 2 began only four hours after the last game on Day 1 was held. Italy have returned to the winning ways as they ended a two-game losing streak. The “Azzurri” defeated Bulgaria in Pool 10 in Osaka, Japan, in four sets, partially 25-23, 25-19, 21-25, 25-19. Bulgaria showed some signs of being alive in the third set when they made a 5-1 run at 20-20 to reduce rival’s lead in sets at 2-1 but, led by their captain Filippo Lanza (20 points), Italy ultimately won all three points. There’s still one more round to be played and the “Azzurri” will have to compensate the absence of Ivan Zaytsev and Osmany Juantorena once again in order to finish Week 3 in the top 5 in the standings. In addition to Lanza, Enrico Cester also stood out for the winners by setting up 4 kill blocks. Nikolay Uchikov scored 19 points, including 5 aces, for Bulgaria.

With 16 points apiece, Bartosz Bednorz and Damian Schulz steered Poland to their seventh win in eight matches with the latter serving 4 aces. The current world champions were dominant against pool hosts Japan 3-0 to claim provision lead in the overall standings. In addition to Bednorz and Schulz, a 4-kill-block sequence of Piotr Nowakowski is also worth mentioning. A teenage opposite Yuji Nishida once again highlighted Japan as he scored 16 points. 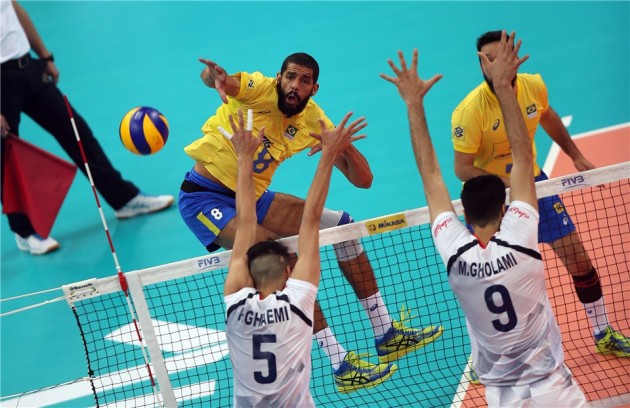 Brazil had a furious start to the game against Iran in Ufa, Russia, but after taking the reins of the first set they lost them in the second period. Despite playing without their best scorer Amir Ghafour, the Asian side was determined to scare No.1 in the FIVB Rankings as they forced tie-break in which Bruno Rezende “Bruninho” found solid connection with Lucas Saatkamp “Lucão” to lead the way of “Seleção” towards win – 25-17, 23-25, 25-19, 21-25, 15-13. By adding two instead of the planned three points to their account, Brazil lost the lead in the standings to Poland although only small details make the gap between these two, namely a set-ratio. Douglas Souza topped Brazil’s scorers with 22 points (4 kill blocks). Ghafour’s replacement in the lineup, a 19-year-old Saber Kazemi was the best scorer for Iran with 15 points, including 4 kill blocks. Masoud Gholami also made 4 kill blocks for the losing team.

Russia scored a hard-fought win against China in front of the packed stands at Ufa Arena. The “Zbornaya” may have closed it in straight sets (25-23, 25-23, 31-29) but only after clinching each one in a two-point difference. Thus, Russia continued their domination over China throughout history of mutual encounters, losing only one in 34 games (1995) and notching the 15th consecutive triumph against Asian rivals. Anton Karpukhov, a 30-year-old debutant in Russia national team, was the man of the match as he poured in 10 of his 21 points in the third set which Russia sealed on the sixth match ball. He added 4 kill blocks to his notable display. Zhang Jingyin scored 13 points for China.

France rejected Argentina’s wake up call to reduce rival’s illusions of seizing a Final Six berth to a minimum. In front of own crowd, the „Team Yavbou“ toyed with the South American side in the first two sets, playing with the best arsenal they have at the moment (25-18, 25-16). Then, France head coach Laurent Tillie started to rotate players and make substitutions. Instead of Earvin Ngapeth, Benjamin Toniutti, Stéphen Boyer, and Kevin Tillie, he introduced Julien Lyneel, Antoine Brizard, Jean Patry, and Thibault Rossard. Argentina took the advantage of this to win the third set (25-23). They even got themselves a 4-1 in the fourth set but have fallen later on (25-20). It is noteworthy that Earvin Ngapeth fired a 128kmph ace in the opening set to share the second place in the fastest-ever volleyball serves list! Stéphen Boyer was the best scorer for France with 17 points. Martín Ramos made 16 for Argentina. Sebastián Solé added 4 kill blocks.

Serbia extended their winning streak to 5 games as they swept South Korea in straight sets with 17 points from Aleksandar Atanasijević and 12 kill blocks as a team.