The United States made Poland’s semifinal hopes in the 2018 FIVB Men’s Volleyball Nations League disappear with a straight-set win in the Final Six clash in Lille, France. 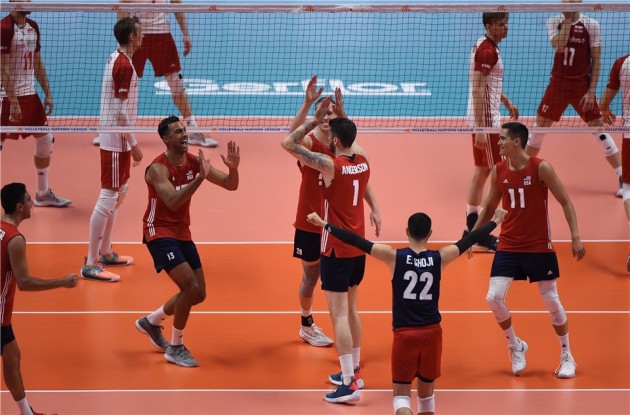 The United Stated launched themselves to the semifinal by sweeping world champions Poland in Round 2 of the Final Six and will play Russia for the top spot in Pool B tomorrow – 3-0 (28-26, 25-17, 25-18). This was Poland’s fifth loss in the last seven games, proving that their semifinal hopes might have died even before Lille tournament.

The opening set could have gone both ways as things were leveled until 26-26 with Americans having a two-point lead at one moment. Taylor Sander closed the set by serving a lucky ace.

Poland started the second set totally unfocused as they threw first three serves down the well. The USA stormed to a 10-4 lead, destroying Poland’s reception from a service line, confidently marching towards clean sweep in the match.

The U.S. team quickly broke the resistance of their rivals in the third set (11-6). Matthew Anderson converted his team’s first match ball as the USA beat Poland for the fourth time in a row. The injury of Taylor Sander in the very finish of the set cast a shadow on the USA’s win which was marked with a notable superiority in kills (46-30) and aces (8-1).

Matthew Anderson was the best scorer in the USA with 15 points. Damian Schulz recorded 13 points for Poland.