In the last match of the second day in Pool II, France upset the home favorites and the reigning European Champions Serbia by 3:0. Nohoarii Paofai (FRA) topped the scorers’ chart with 12 points, including 8 blocks. Find all relevant news from volleyball world on worldofvolley.com. 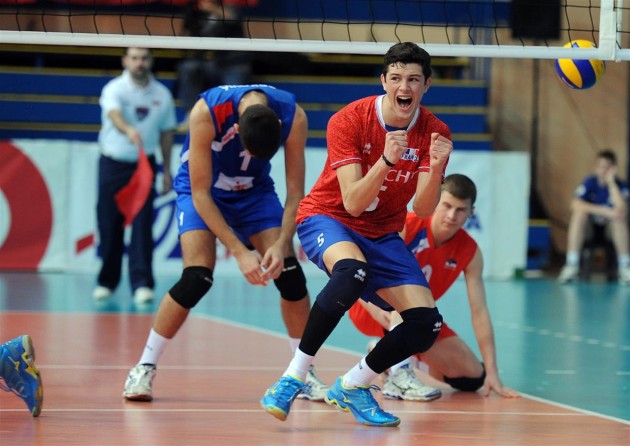 The home side Serbia managed to hold off the persistent French team only until the first technical time-out in the first set (8-7 to France). After the break, the French players started building the gap with an aggressive play that Serbia could not match. The French were firmly in control and by the end of the set the home side could only shorten the distance for a tolerable 23-25 in favor of “Les Bleus”.

In the beginning of the second set France got off to an early 11-5 lead which allowed them to comfortably control the situation on the court. Once again Serbia tried to return to the match but could only cut the distance by a few points for yet another disappointing score of 22-25, and 0:2 in sets.

In the third set Serbia showed some fighting spirit and reacted with an early 10-7 lead. However, France never lost their focus and slowly but surely started narrowing the gap. They reached the tie at 12-12, and after that they once again took complete control of the match. Serbia was close, but not close enough. In the end, it was a well deserved 25-21 for the straight-set sweep.

Slimane Belmadi, head coach of France: “I am very happy. Serbia is a country of volleyball and it is hard to play against them on their home court. So we had to mix the line-up a little bit, and luckily for us it all worked out.”

Milan Djuricic, head coach of Serbia: “We played better than yesterday. Still, we are missing a key player to step up in the decisive moments. The guys are scared, they have to get some experience from these matches. We are in a tough position right now, and we will have to dig deep to earn a ticket to Laktaši.”

Luka Bašić, captain of France: “We knew that Serbia is a great volleyball nation. We were aggressive right from the start and we got the perfect result.”

Lazar Dodić, captain of Serbia: “They are a good team. We should have played much better. Tomorrow is a new day, and I hope we can win against Turkey.”