After four defeats in a row, a young French team is hoping for a better result in their upcoming home match against Poland. “My team is young. Very young and inexperienced and every game is a learning process,” explained Laurent Tillie. 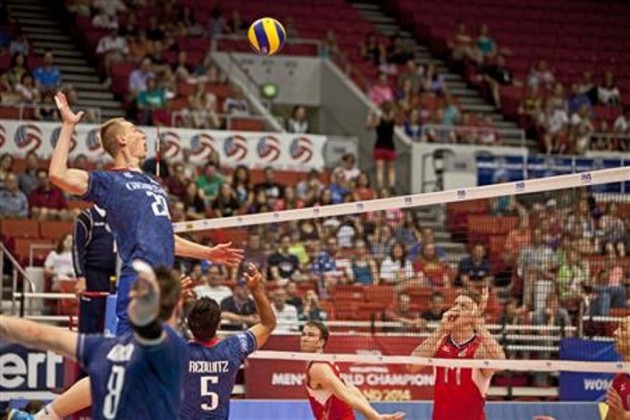 “My team is young. Very young and inexperienced and every game is a learning process,” explained Laurent Tillie. Since the start of the 2013 World League, Earvin Ngapeth and his teammates have taken some hard knocks against Bulgaria and Team USA, which has not yet resulted in victory for ‘Les Bleus’.

France will face Poland in Rouen on Friday, June 21 and then in Toulouse on Sunday. Facing the current reigning champions is never an easy task. “It’s going to be tough. They are solid and powerful,” said France’s head coach. But this time, the French squad hopes for a win. “We need it,” said Laurent Tillie. “It’s always frustrating for a coach to see a team trying so hard for nothing.”

Back to France after a long trip to Tulsa, Oklahoma, French players and staff have not really had a rest, travelling to Rouen on Wednesday before facing Poland on Friday evening. Laurent Tillie has made one change in his squad bringing in Nicolas Marechal, 26, a wing-spiker from Cannes, to replace Samuele Tuia. “Samuele is exhausted and he needs a break,” explained Laurent Tillie.

“We had a bad start, that’s for sure,” said Tille, “but I don’t look at it as a catastrophe. We are improving.  But my players need to be able to finish a set.”

France and Poland faced each other in the final of European championship in 2009. Poland won to claim its first and only continental title.  None of the French players who will be on the squad on Friday and Sunday night were part of the team.