The fans of Tauron MKS DABROWA GORNICZA can be very proud for their heroines and favorite club are very popular all over Poland, even in small cities in the north like Szczecinek. 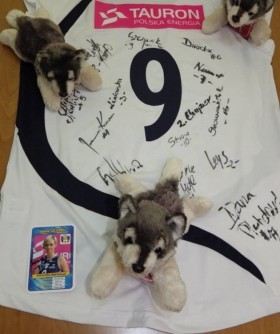 Some representatives of the Forest Inspectorate of Szczecinek have followed Tauron MKS since the very beginning of the past season keeping their fingers crossed especially by the time that the team was fighting for the national championship with Atom Trefl SOPOT. They sent talismans – such as teddy wolves – to wish the best of luck to the players from Dabrowa Gornicza in their quest for the national championship. “You have to behave like wolves: being crafty, fast and also ruthless when it is time for this. On the other hand, you have to respect your teammates and your opponents up to the end” Mr. Janusz Rautszko wrote in a letter addressed to the players of Tauron MKS. They all love Volleyball and participate in local tournaments open to people working for the forest inspectorate or similar competitions thereby using their free time for a healthy lifestyle.

“We would like to thank our fans from Szczecinek for this letter and the gadgets they sent to us” says libero Krystyna Strasz. “They are so cute and real at the same time. We have hung this letter in our locker room and it will bring us only good memories. It did not help us win the national league this year but maybe it will in the next season” she adds.