On Tuesday France’s multiple champions RC CANNES will play Turkey’s standout Galatasaray Daikin ISTANBUL for the first round of the Playoffs 12 in the 2014 CEV DenizBank Volleyball Champions League – Women. 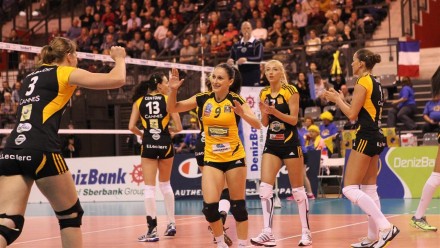 This is going to be a real challenge for the home heroines especially since some of the players included in their roster just got back to the French Riviera after playing the World Champs qualifiers with their respective national teams.

“To make things clear right from the beginning, the three teams from Turkey participating in this year’s CEV DenizBank Volleyball Champions League fully belong to the European elite” says RC CANNES head coach Yan Fang. “Galatasaray is as strong as Eczacibasi that defeated us twice, and always in straight sets, in the prelims. Even though they will be missing their best spiker, i.e. Madelaynne Montano, they still remain a very tough opponent and their players have a lot of experience at this level. Their roster is very consistent and homogeneous, with the addition of a great coach like Massimo Barbolini, who has been at the helm of Italy’s and Turkey’s national teams lately” he continues.

The most iconic player of RC CANNES, team captain Victoria Ravva, won’t join the game as she still needs to fully recover from the injury she suffered at her Achilles heel. RC CANNES recently signed Romanian-born middle-blocker Nneka Obiamaka Onyejekwe (187 cm) but she won’t be eligible to join the actions for she already starred in that same competition for another team this year, namely Switzerland’s Volero ZÜRICH.

“Our game will be based on our strengths, which are our collective spirit and our ambition to go as far as possible in this competition” Yan Fang admits. “We knew that in the Playoffs 12 you do not get to play any weak team but Galatasaray is really strong. We are the underdogs and we hope that our fans will flock to the sports hall to help us win our home game with the Turks” he concludes.

JPN W: Tight at the top