On Saturday France’s NANTES Rezé Métropole will vie for a spot in the final of the 2014 CEV Volleyball Challenge Cup trying to surge back after losing the first leg of the semifinal with Turkey’s Fenerbahce Grundig ISTANBUL. 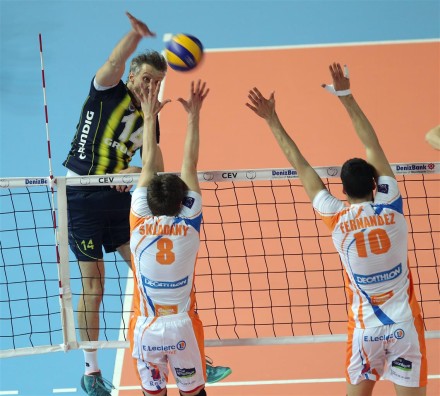 After losing 1:3 on Wednesday to Fenerbahce, NANTES has only one option, i.e. to win the return game by 3:0 or 3:1 to call for a golden set. The team is currently ranked fourth in the national league and already claimed a golden set victory in the 1/8 finals as they hosted Finland’s Tiikerit KOKKOLA. The sports hall in Rezé shall be packed with more than 1,200 fans trying to push their heroes to what would be their best result ever in the European Cups.

On the other hand NANTES will be missing two key players: Slovak Stefan Chrtiansky is still injured while Israeli wing-spiker Alexander Shafranovich got injured before the game in Istanbul and his availability for the home match is not confirmed yet. Still the players mentored by head coach Martin Demar have nothing to lose and will be trying to delight the home crowd at the Arthur Dugast sports hall in Rezé.