WoV Player Of The Year: The Frenchman

He was the definitely one of the players who marked the year 2016. After winning several prestigious trophies and filling the web pages with his spectacular plays, at the end of the year Earvin Ngapeth has received another valuable recognition. 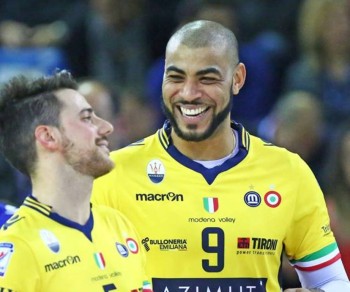 You chose him to be the WoV Player Of Year.

Earvin Ngapeth is the player everyone have been talking about during the whole year. Simply, he the character you cannot ignore, and why would you? You can love him or not, but the Frenchman is definitely one of the best players who entered the volleyball world in recent history.

He has definitely found his true self in Modena. Ngapeth joined the club with such a rich tradition, but which has been struggling for years and constantly failing to win the Scudetto. However, when the Frenchman arrived in the city, everything changed. Together with Bruno Rezende, Lucas Saatkamp, Nemanja Petrić, Luca Vettori and the others, Earvin Ngapeth has brought back the domestic title to Modena after 14 years of waiting! On top of that, this group of players also won the Italian Cup and the Italian Supercup and completed a dream season for the club.

Ngapeth was the leader of that team.

The only thing the Frenchman lacked to round up this perfect year was the Olympic medal. France got eliminated in the group stage which was definitely one of the biggest upsets of the Rio 2016, nut that has not broken the spirits of Ngapeth.

He returned to his Modena, started the new season and continued to impress volleyball fans around the world.

And we are all looking forward to watch him in the next year.