In the fifth attempt in a row, Allianz MTV Stuttgart won the German Women’s Volleyball Championship. 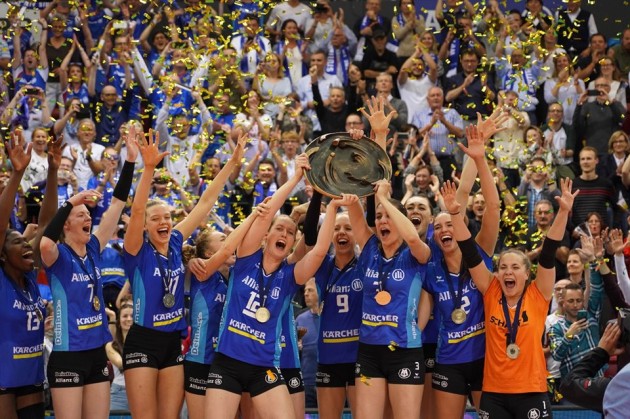 It was all about the number 5 when it comes to Allianz MTV Stuttgart last night – they needed five title matchups and five sets in the fifth game of the 2018/19 1. Bundesliga Frauen playoff finals against SSC Palmberg Schwerin to clinch their first-ever German Championship gold medal.

At the same place where Schwerin celebrated the championship last season, SCHARRena (sold-out for a decisive match – 2,251 spectators), the players coached by the Greek Giannis Athanasopoulos lifted the trophy and prevented the same scenario: 3-2 (25-12, 25-20, 14-25, 24-26, 15-11). Actually, Schwerin prevailed over Stuttgart in the playoff finals in the last two seasons.

The American opposite hitter Krystal Rivers, who scored the championship point, was named the MVP of the Match and also MVP of the League, pouring in 29 points in Game 5. Her compatriot McKenzie Adams scored 19 for Schwerin. Unfortunately, Stuttgart starting outside hitter Julia Schäfer was unable to help her teammates in this match as she got injured during Game 4, cheering for her team on the crutches.

It was an emotional night in Stuttgart as three players from the new titleholders decided to end their careers at the end of Game 5: the Brazilian middle blocker Micheli Tomazela Pissinato (34) after six seasons and Hungarian outside hitter Rénata Sándor (28) after five seasons in the club, while American middle blocker Mallory McCage (25) left Stuttgart after two seasons for personal reasons as she wanted to start building her career outside of volleyball.