On Monday Germany’s girls claimed their last match with the home heroines of the Czech Republic with the score of 3:1 (25-20, 20-25, 25-21, and 25-19) to finish first in Pool B and therefore make it to the final round of the 2013 CEV Youth Volleyball European Championship scheduled for late March in Bar (MNE) and Kladovo (SRB). 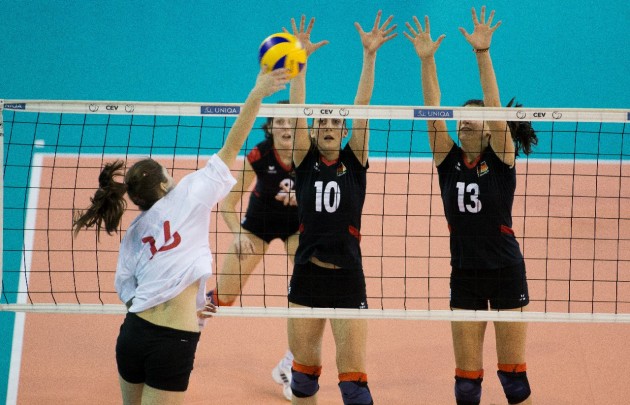 The Czechs will travel there too as they finished the prelims as one of the second-ranked teams with the best score across all Pools.
Germany showed their best Volleyball for this deciding game, performing very well from the serving line to control the offensive power of the Czechs. “Today we served really well and we are very pleased with this performance as well as with our first place in the tournament” says German mentor Jens Tietböhl.

“We were nervous going into this game but it’s a great feeling to finish first and we are very happy with this. I think that the game was decided by the fact that we could control their best attacker, Michaela Mlejnkova. I am very glad that after our shaky performance with Hungary on Sunday we got back on track and played a superb game” adds Germany’s team captain Steffi-Martha Kuhn.

“I think that our opponents were well prepared for this match. We look forward to the final round” comments Czech mentor Leos Chalupa.

“We really wanted to beat Germany and get the right boost for the final round but we couldn’t make it. We are very disappointed but still I believe we can be successful in the final round and we’ll certainly work hard to get ready for this event” concludes Czech leader Pavlina Simanova.

In the other match of the last day Hungary beat Portugal 3:2 (24-26, 20-25, 25-23, 25-20, and 16-14) showing great fighting spirit to come back from two sets down. Even though these teams were already out of contention for a spot in the final round, they showed real determination to finish their campaign on a high note. Ines Alves top scored in the game with 27 points. “We were very disappointed after losing to Germany at the tie-break on Sunday so we needed some time to find our way into the game. We stormed back after losing two sets and this was good. Our goal was to qualify for the final round but I believe we can achieve this next year as we move up to the junior division” said Hungary’s leader Reka Ludman.

“We fought bravely and were close to claim our second victory in the tournament. However, our opponents performed strong in serving and attack, so after they claimed the third set, they got control of the game and they deserved this win” concluded Portugal’s team captain Ana Martins.

GER M: Where others have failed, Haching...