EL W: Germany takes on home round with high expectations

Sixteen players have come together at CU Arena in Hamburg to prepare for the third round of action in prelim Pool B of the 2013 CEV Volleyball European League – Women. Read more about latest volleyball news, games reports, and statistics on WorldofVolley. 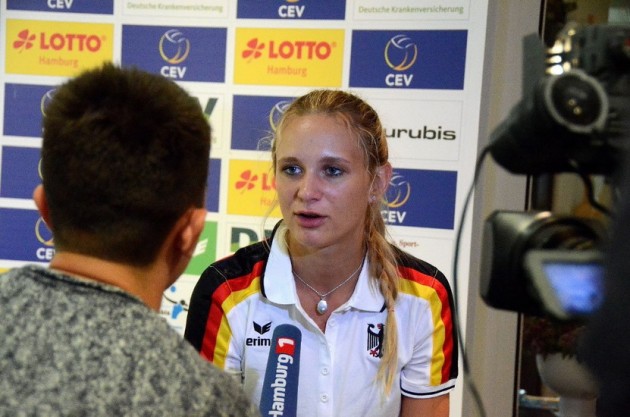 On Thursday head coach Giovanni Guidetti will release 12 names thereby making it clear about who was retained for this much awaited home round. Germany will debut on Friday by playing Israel at 8 pm. After two rounds Belgium tops the charts of the group with six wins in as many matches.

The hosts do not seem much surprised by the performances delivered by the Belgians. “Two of their players have spent the past season in Italy, one in Poland and another one is about to move to Italy too” head coach Giovanni Guidetti says. “They have been together for two months since they first prepared for the first round of the World Championship that they hosted in May. This is a good team with young but very talented players. Here in Hamburg I would like to see my team perform at their level, especially when it comes to our block and defence system” he continues.

On Tuesday the group did briefly stop their daily routine as head coach Guidetti and team captain Margareta Kozuch had to attend a meeting with the local media. As she was born in Hamburg and she is somehow returning home, Kozuch was in the spotlight and did get many questions from the journalists in attendance. After two rounds played in Belgium and Serbia, Germany is currently ranked third in Pool B. The goal for the coming weekend is to score three wins and make it to second place in the standing. “We want to make a step forward here in Hamburg. We have improved from round to round and now it is time for another step” Guidetti concludes.