Japan overcame Peru 25-20, 27-25, 25-19 in Wednesday’s second round of 16’s match at Brno’s Kajot Arena, advancing to the quarterfinals of the 2013 FIVB Women’s U20 World Champs. This and other volleyball news read on Worldofvolley.com. 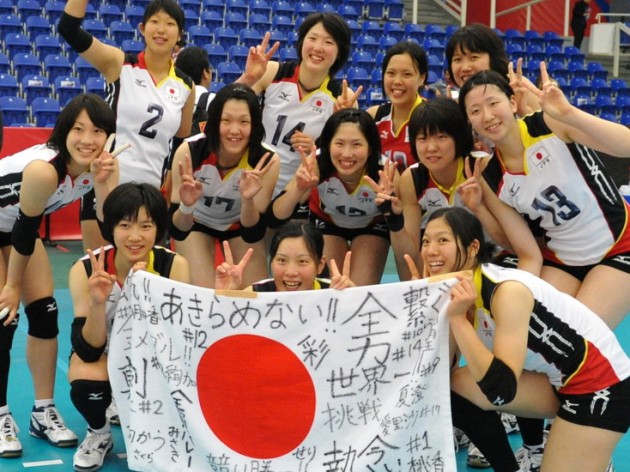 The key moment of the match came at the end of the second set when Japan came from behind to outfox the team of Peru coach Natalia Malaga in extremis.

Japan captain Momoka Oda led her team with 16 points in the match while Angela Leyva was Peru’s highest scorer with 15 points.

Japan gained momentum early in the first set. Led by their outstanding libera Manami Kijima, the Asians once again showed great defence skills. Peru came back strongly in the second set but could not take advantage of their seven-point lead at 22-15. Japan saved two set balls before Captain Momoka Oda smashed for a hard-earned 2-0 set lead. The Asians continued their winning streak in the third set and never looked back.

Japan will challenge Turkey in Friday’s quarterfinal. Peru continue their 2013 FIVB Women’s U20 World Champs campaign in the classification round for rank 9-16.

The key moment of the match came at the end of the second set when Japan came from behind to outfox the team of Peru coach Natalia Malaga. Japan eventually won 3-0. We are honoured to advance to the quarterfinals, said Japan coach Yasuhiro Fukuda.

Japan coach Yasuhiro Fukuda: “I am very pleased with the result and our performance. It was important to come back strongly after our loss versus Serbia. We are honoured to advance to the quarterfinals.”

Japan captain Momoka Oda: “We felt our legs and shoulders today but managed to focus on our tasks.”

Peru coach Natalia Malaga Dibos: “We could not handle our passing – it was the key factor today. Who knows what would have happened if we won the second set.”

Peru captain Ginna Lopez: “We played well but unfortunately, we were not able to pull clear at the end of the second set. We are very frustrated.”

EL W: Germany takes on home round with high expectations