Rote Raben and Generali Haching will win the DVV-Finals 2012- when you ask the DVV- internationals. The majority of the interviewee believes in the defeats of the two Bavarian clubs. 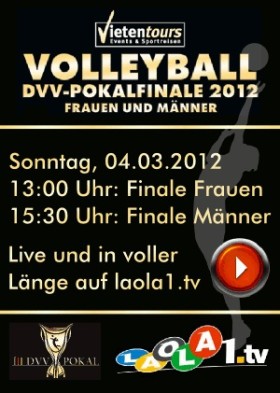 On Sunday 4th March proceed the women finals between Rote Raben Vilsbiburg and SC Schwerin in the modern eventarena in Halle at 13:00. After that the men finals take place between Generali Haching and VfB Friedrichshafen.

All polled internationals are one with eachother: It is going to be very exciting!
Maren Brinker (Pesaro/ITA) tips 3:2 for Schwerin `because I think, that Schwerin has more following wind because they won the game in the German Bundes League against the Rote Raben.´
But she is the only one who believes in that. Kerstin Tzscherlich (Dresdner SC), Corina Ssuschke-Voigt (Sopot/POL) and Regina Burchardt (1. VC Wiesbaden) tip Vilsbiburg. `I would tipp Vilsbiburg, because they bought well. Schwerin has a young team and might get nervous because of the great audience. Although it is also unusual for the new ones in the team of Vilsbiburg.´ says Ssuschke-Voigt.

Regina Burchardt, a former player in Vilsbiburg means: `At the end Vilsbiburg will earn the cup. In my opinion they are the strongest team in the league, they have more experienced players, to my mind they can handle the finals feeling better. Certainly it is going to be an exciting game. I wish both teams a wonderful experience, its something special in Germany.´

The mens finals are going to be thrilling! Patrick Steuerwald (Warschau/POL) says: `Of course I´ll keep my fingers crossed for my ex-colleagues. But Friedrichshafen grew better and better in this season. Because of that the two games Haching won don’t count anymore. I think in the end a little bit of luck will decide like last year.´ Also his brother Markus believes in Haching, `because VfB has to play without a learnt diagonalplayer. Haching is the favourit, the question is how the team can handle this and whether they can release their best effort. But pressure is guaranteed.´