After claiming their home match last week, Germany’s sensation TV Ingersoll BÜHL are in a very good position to make the Challenge Round of the 2014 CEV Volleyball Cup – Men but they first need to take another two sets in their return game with PAOK THESSALONIKI that is coming up on Wednesday in Greece. 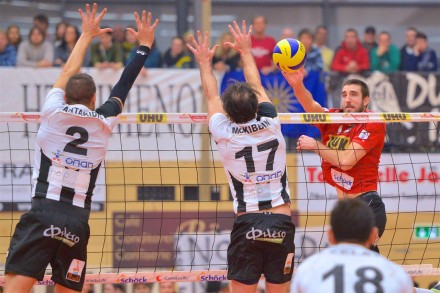 TV Ingersoll team manager Georgios Vlachojannis is very much looking forward to the upcoming match: “We are very proud of what our team has achieved so far in the competition. They have done a great job in the CEV Volleyball Cup and I am also pleased with the steady development showed by our players. This is going to be a very special game for me since we are travelling to my home country. However, we will go there to seize the night and we do not want to make any gifts to our opponents. The team is very motivated and all of the players want to progress to the Challenge Round” where TV Ingersoll would eventually play France’s PARIS Volley.

Wing-spiker Lucasz Szarek will unfortunately miss that game being sick and will be replaced by Estonia’s Martti Juhkami who is set to make his debut in the 2014 CEV Volleyball Cup. If they seize the night in Thessaloniki, TV Ingersoll will add another chapter to their already remarkable success story.

Do I really need a volleyball manager?