Julia Retzlaff, the captain of SCHWERINER SC –winner of last year’s Bundesliga and of the national cup this past March – will retire from competitive Volleyball at the end of this season. 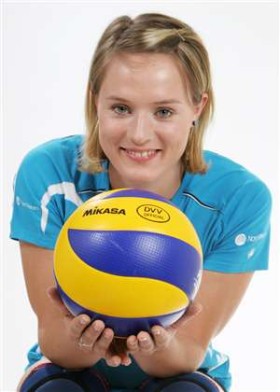 Retzlaff – who is only 24 and plays as outside hitter – started playing Volleyball while attending the primary school and in 2005 joined the VCO BERLIN, a special project worked out by the German Volleyball Federation and whereby the most promising players from all over the country are getting together to get valuable experience in the Bundesliga.

Actually she did already play in Germany’s second division even before moving to Berlin as she lined up for the likes of VC PARCHIM, while training regularly also with SCHWERINER SC.

After spending one year in Berlin, Retzlaff returned back home and joined SCHWERINER SC in the 2005/2006 season, to complete in 2007 her education at the sports high school which is located right next to the sports hall where the team plays all of its home matches in domestic as well as in European competitions.

Retzlaff has been captaining SCHWERINER SC for four years after accepting that role as a confirmation of her value and reputation in the group. With the likes of SCHWERINER SC, she has been a triple national champion (in 2006, 2009 and 2011) and has won the German Cup for a total of three times (2006, 2007 and 2012).

After graduating from the “Baltic College” in Schwerin with her major being hotel and tourism management, this summer Retzlaff will be finishing her distance learning course in sports science and she is ready to quit Volleyball to start up another phase of her life that goes beyond the sport.

“I really hope that I will be able to find a job that will bring as much joy and satisfaction as Volleyball did in the past years” she says. “I still do not know exactly what I will be looking for and maybe it will take some years before I find the right thing” but she feels confident as the sport has taught her to be ambitious and patient at the same time.

Another special moment is coming up for Retzlaff as after being in a relationship for a couple of years and engaged for some 12 months she will get married later this summer.