Schwerin, Germany, April 12, 2012. SCHWERINER SC claimed the first final match in the Championship series with the archrivals of DRESDNER SC by scoring a 3:2 home win to the delight of more than 2’000 fans (25-16, 26-24, 19-25, 17-25, and 15-10). In what is a remake of last year’s finals where SCHWERINER SC had also seized the first night and with the same score, the group mentored by Teun Buijs needed more than 2 hours of great Volleyball to bring it home and possibly go for back-to-back crowns in the Bundesliga. 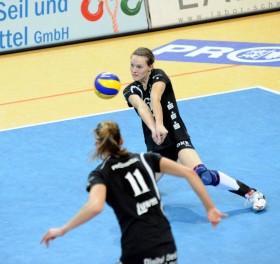 SCHWERINER SC caught a marvelous start (8:0) and literally dominated the scene in the opening set. Set 2 was very close and hard-fought with the home side eventually having the upper hand after an exciting final rush (26-24). The local fans were evidently hoping for a speedy win in straight sets but DRESDNER SC fought back with glowing hearts and the course of the game turned completely around as the girls from Saxony imposed their pace in set 3 and 4 accompanied by some 100 supporters that did their best to cheer on their own heroines. The match re-started from the scratch but in the tie-break SCHWERINER SC was able to display some excellent actions and to remain very concentrated to go for the final 3:2 (15-10).

The second match of this series is scheduled for Saturday at “Margon Arena” in Dresden. Last year the players of SCHWERINER SC claimed also that way match in straight sets to be crowned national champions and this time the group captained by Julia Retzlaff – who will retire from competitive Volleyball at the end of the season – will be accompanied there by some 200 members of the so-called “yellow wall” that has turned into the trademark of the club since the finals of the national cup played this past March 4 in Halle/Westfalen.

The setter of SCHWERINER SC Denise Hanke (pictured) was honored, within the frame of the first final game, as MVP of this year’s Bundesliga by the chairman of the German Volleyball League, Michael Evers, and by Mr. Erwin Sellering, the Minister-President of the Federal State of Mecklenburg-Vorpommern whose capital city is Schwerin. Hanke follows in the footsteps of her teammate Patricia Thormann who received that same distinction at the end of the 2010/2011 season.

RUS W: Dinamo Kazan one step away from title