Tomorrow (22 April at 15.30h) BERLIN RECYCLING Volleys and Generali Haching will play the decisive match for the title of the German champions. 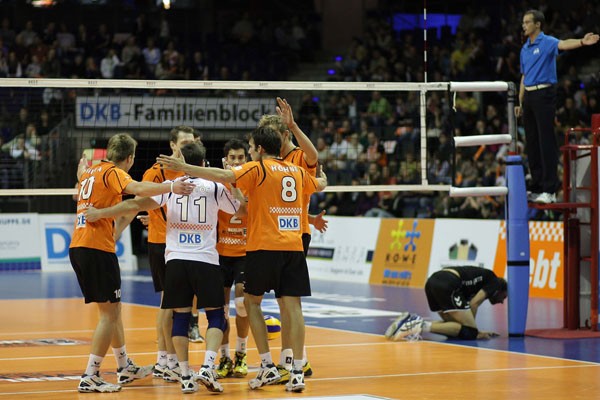 After four matches of the final series, BR Volleys and Generali Haching are even in the series 2-2. In the fourth match BERLIN RECYCLING Volleys defeated the opponent with 3-0 on their court. Tomorrow the fifth match will determine the winner of the German championship for men.

For both teams, the championship trophy is within reach. The coach of Generali, Mihai Paduretu, emphasizes the advantage of  playing the match at home – “We have shown during the whole season that our performance at home is fairly constant. So, I am convinced that playing the match in Unterhaching with the support of our fans will be decisive for us to win!”

However, the coach of BR Volleys, Mark Lebedev, believes that his team will take the victory – “Everyone dreams of playing the final of the championship. We are all incredibly happy and are looking forward to this match. Our goal is clear, we are going to Unterhaching to win. We have worked hard to improve ourselves individually and as a team. Moreover, on the last day we showed our best possible performance. Tomorrow is the crucial day.”