Germany beat Serbia in tiebreak mainly thanks to Georgy Grozer, who scored 39 points despite Serbia has already been leading 2-0 and it seems that Germany will qualify to the play-offs at the expense of Serbia. 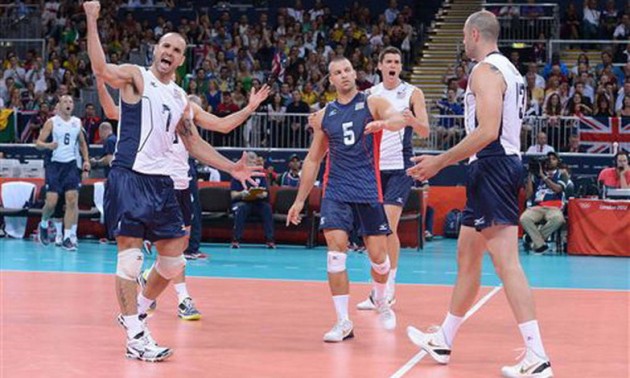 USA won with Brazil and this team took the lead in pool B.

Australia won their first match of the London 2012 Olympic Games volleyball competition beating Great Britain in three straight sets (25-15, 25-18, and 25-20) in a preliminary round pool A match at Earls Court on Tuesday. The most obvious area where the Australians dominated was in defense. The Australian blockers formed an impenetrable wall and Thomas Edgar lead the way with three. In total Australia blocked nine shots to Great Britain’s one. Edgar also led Australia in scoring with 13 points followed by Igor Yudin’s 10.
Great Britain’s players were their own worst enemy in this match, committing 32 errors to Australia’s 20. Their best was Mark McGivern who finished with seven points.

Poland trounced Argentina in straight sets (25-18, 25-20, 25-16) to achieve their second victory in Pool A of the Olympic Games men’s volleyball tournament at Earls Court on Thursday.

The Polish relied on a superb offensive effort to subdue an Argentinean team who appeared sluggish throughout the match. The South American side are now at 1-2.

Poland was better in all parts of volleyball overwhelming Argentina particularly in attack. Bartosz Kurek and rest of Poles recorded a 64% efficiency having finished 48 of 74 attacks while Argentina noted 43%. Poland outblocked Argentina 6-4 and also were better in the service winners category 6-1.

Zbigniew Bartman, who landed 15 spikes out of 22, topped the winners with 17 points, followed by Bartosz Kurek with 16 and Michal Winiarski with 12.

Argentina’s Federico Pereyra and Rodrigo Quiroga finished the match with 11 and 10 tallies respectively.

There was no surprise in the last match of the day. Italy, as expected, beat Great Britain 3 – 0 (25-19, 25-16, 25-20) at Earls Court and maintained the third position in pool A. In spite of playing with outsider, Italian coach Mauro Berruto started the game with the major players making only one substitution in the middle of the net. Alessandro Fei has been changed by Emanuele Birarelli. You also could see a legendary Samuele Papi in the 3rd set.

Having gained points Italy entirely dominated attack while Great Britain scored in this element. ‘Azzurri’ was simply better and deservedly won this duel.

Germany scored on Thursday its first win in the men’s Olympic tournament by storming back from two sets down to eventually edge Serbia at the end of a thrilling tie-break (22-25, 27-29, 25-18, 25-20, and 20-18). With this result Germany got its revenge for the couple of defeats suffered in the last international matches with Serbia, as the “Plavi” had prevailed in the prelims of the Beijing Olympics .

Germany improved its record in the competition to 1 win and 2 losses, exactly the same registered by Serbia up to now. György Grozer amassed a terrific haul of 39 points, including 7 blocks and 3 aces, well supported by Max Günthör who contributed 20 to Germany’s count. Aleksandar Atanasijevic paced Serbia with 22. Germany totally dominated in blocking registering 21 vs. 10 for Serbia and got better figures also in serving, with 5 aces vs. 3, and Grozer being once again the player with the fastest serve (124 km/h).

It was the second victory against one loss for Russia while Tunisia suffered their third defeat in a row.

After losing 3-0 to No. 1 Brazil in their previous match of the competition, the team of Vladimir Alekno came back strong and didn’t allow many opportunities to the African opponents until the third set when they relaxed a little and had to come back to seal the victory.

In what was the real highlight of the day the USA edged Brazil to somehow confirm the result of the final match played four years ago in Beijing – even though by then the composition of the teams was slightly different – this time by cashing the match with the score of 3-1 (23-25, 27-25, 25-19, 25-17). With this result the USA stay on top of the charts in Pool B with a perfect record of 3 wins in as many matches while Brazil dropped down to 2-1, moving up the count of the Olympic head-to-heads with the South Americans to a positive ratio of 6 wins and 5 losses. Three US American players finished the game in double digits with Clayton Stanley scoring 19 points, while Reid Priddy and Matthew Anderson registered 17 and 14 respectively. Leandro Vissotto paced Brazil with 17 but the difference was made by USA’s aces and blocks (9 vs. 5 and 6 to 2) to re-confirm that the guys mentored by Alan Knipe are in a great shape and ready to go for back-to-back Olympic crowns.

In the next round coming up on Saturday Brazil will play Serbia while USA have another demanding test with Russia.