Germany’s DRESDNER SC hosts Eczacibasi VitrA ISTANBUL of Turkey for the third round in Pool D of the 2013 CEV Volleyball Champions League – Women. Eczacibasi defeated Tauron MKS Dabrowa Gornicza and Azerrail Baku. Alexander Waibl spoke of them, and pointed out Lioubov Shashkova as the main player. 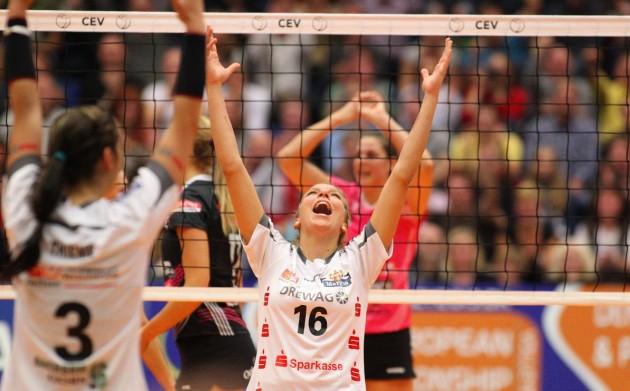 Eczacibasi is an absolute standout having swept all domestic competitions last year and is also the current leader of the group with six points out of two matches. “Eczacibasi is the clear-cut favorite in our Pool and they confirmed their potential by scoring very convincing wins in their previous clashes with Tauron MKS DABROWA GORNICZA and Azerrail BAKU” says the local mentor Alexander Waibl.

Their roster includes some of Europe’s best Volleyball players, such as Russian superstar and double world champion Lioubov Shashkova who already visited Dresden last year as she was representing the likes of another side from Turkey, namely Fenerbahce Universal ISTANBUL. Shashkova is joined in the starting six by Turkey’s heroine Neslihan Darnel and 2012 Olympian Özge Cemberci Kirdar, plus two members of Croatia’s national team, Maja Poljak and Senna Usic Jogunica.

“We are excited to play against such a stellar team. We definitely need to step up the quality of our play and look for some good tactics. I hope that many fans will come to the sports hall as they did a couple of weeks ago for our first home match with Poland’s Tauron MKS DABROWA GORNICZA” adds Waibl.

Setter Mareen Apitz also can’t wait for that “big match” coming up on Wednesday. “We expect a great atmosphere. Last year, as we played Fenerbahce, we could pressure our opponents and this time we want to perform as good as we can even if we have some injured players that will hence be missing this match”.

DRESDNER SC is indeed sidelined by some injuries that have plagued libero Kerstin Tzscherlich, outside hitter Anne Matthes as well as middle blocker Laura Heyrman.