Olympiacos had financial problems experienced due to the country's economic crisis, so foreign players left the Piraeus club in past 2-3 years. Now, Leonardo Caldeira is the first foreigner to return to play for the Greek champions. 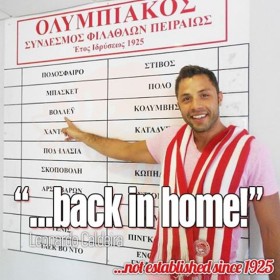 In the past, the Brazilian played in the rich era of Olympiacos with many stars in the season 2009/2010 and now he returned with a goal to be champion again.

“In 2010, I was negotiating a 2 year contract with Olympiacos, but with the crisis in the country they decreased investments and ended up hiring young players with low contracts,” Caldeira said about his departure from the team at the time.

After he left Greece, Caldeira played in Italy (Forlì), Brazil (Montes Carlos) and last year in Montenegro (Budva), but with the lack of payment he left the team and played in Pamvochaikos, where he participated the first play-off final in club’s history, losing title to his new-old team Olympiacos.

The Brazilian receiver made a comparison between now and the three years ago and said: “There was a lot of money back then and a lot of stars: Tischer, Mjlković, Felipe, Kunnari and with this team we could be first in Europe, as we were in Greece. This year I’ll give my best, I want to be the star of the team.”

Leonardo completed his statement: “I love this country, and it is an honor for me to play again in Olympiacos. Only those who wore the red and white jersey could understand the meaning of being part of this great club.”

This season the only player who was in the team with Caldeira in 2009/2010 is the libero Stefannou. This year several teams were strengthened such as Foinikas, PAOK, AEK, Pamvochaikos and Alexandropolis, improving the race for the title and showing the sport in the country is recovering from the crisis affecting Greek economy since 2007.

See the profiles of Leonardo and Olympiacos.

For more news from this country, click on Greece.

Interesting practice of Olympiacos – Hit that...