Athens, Greece, March 12, 2012. This past weekend, with many well-known personalities of the local Volleyball family in attendance, the Hellenic Volleyball League celebrated the most outstanding players of the past year with a gala organized in Athens. 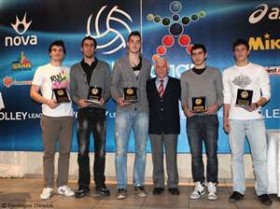 Mitar Djuric – who is currently playing for TRENTINO Volley in Italy – and Evangelia Chantava – who also moved to Italy this season to play there for Terre Verdiane Servizi Italia – were named best male and female players of the year 2011.

Epaminondas Gerothodoros was voted referee of the year while the award for the best coach went to Nikos Zalmas (Pamvohaikos).

Mr. Dimitris Palioportas from the club Finikas (Syros) was selected as President of the Year while the boys’ youth squad that claimed an excellent sixth place at the 2011 European Championship in Ankara got the award for the team of the year (pictured).

Marios Gkiourdas, a former national player who starred also for the teams of Alexandropolis, Olympiacos, Parma and EA Patras, got a special award for his outstanding career while Freddy Brooks – a Cuban born player who has settled down in Greece – and the retired sports journalist Yorgos Russakis were also honored on that evening.