UPCN Voley won the third game of the quarterfinals beating Catamarca with 3:0, partially 25:18, 25:19 and 25:13. With good reception and block, UPCN advanced to the semifinals of the League Volleyball Argentina Native Card Nation 2011/2012. 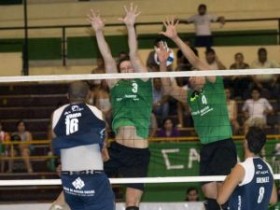 The first set was played intensely and both teams made errors.

To the first technical timeout the host was leading with 8:6, but UPCN improved the playing and took the lead of 16:14.

From then the hosts began making errors.

Thanks to the attack of Junior and Bonini the guests took the lead of 15:20.

Finally, with the point of Junior, UPCN closed the set with 25:18.

In the second set Catamarca tried not to neglect the defense and pressure from the block. Barrial’s attempt to surprise UPCN with the entrance of Plaza Gandini did not chnage the result. After the leadership of 13:16, UPCN thanks to the strong attack won the second set with 25:19.

In the last set UPCN was supreme and Catamarca did not find the way to break the champion. They got the greatest advantage of 12 points. Barrial tried to improve the reception with the entrance of Dubinski, but in vain. The team of San Juan played the best they could and  stood out as candidates.

CEV CUP M: Asseco Resovia has to live up to high expectations in semis with ACH Volley