CEV CUP M: Asseco Resovia has to live up to high expectations in semis with ACH Volley

Rzeszow, Poland, March 13, 2012. Asseco Resovia RZESZOW will play this Wednesday at 6 pm local time its first semifinal match of the 2012 CEV Volleyball Cup against ACH Volley LJUBLJANA, a team full of young, talented players that always stand out for their passion, ambition and team spirit. 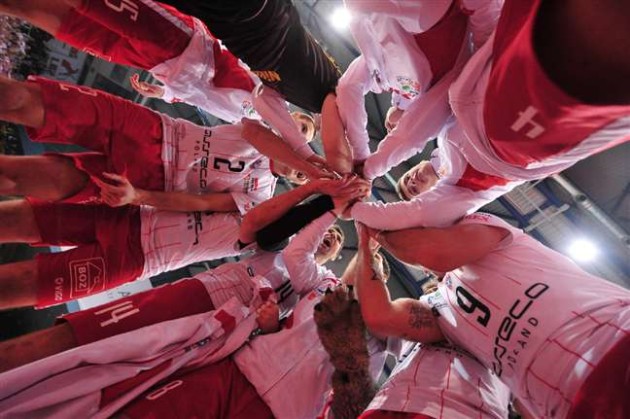 For Asseco Resovia RZESZOW it is a great opportunity to reach the final of the European Cups. The Polish team was re-shaped in the past years and strengthened each season in order to achieve more and more successes. However, since the Polish Cup Final Four Tournament in 2009/2010 Asseco Resovia lost the next five semifinals in a row (in the Polish league, in the Polish Cup and last year also in the CEV Cup) and now is determined to stop this negative series.

In the last period before the CEV Cup semifinals Asseco Resovia, ranked third after the regular season, won two games against Tytan AZS CZESTOCHOWA (3:1 and 3:1) in the first round of the Playoffs in the PlusLiga while ACH Volley LJUBLJANA lost the final of the Middle European League to Hypo Tirol INNSBRUCK (1:3). “It was an important tournament for us. Unfortunately we lost it because we didn’t have much time to prepare. In the last few weeks we had to play a lot of games in our national league in which, to be honest, we can’t compete with strong teams in order to improve our level of play. Nevertheless, now we are facing a powerful Polish opponent in the CEV Cup and this is a very important duel for us” says Igor Kolakovic, head coach of ACH Volley LJUBLJANA.

“We are aware of the fact that Asseco Resovia has a very strong and wide roster. They can count on more than 12 players ready to play almost in every moment. We have definitely a younger and less experienced team this season. What’s more, at the moment we have to play without our best scorer, opposite Alen Sket, who is having serious problems on his knee. However, we have our chances and we are not going to give up. We must be patient and wait for our opportunity, fight for every point because we don’t have the same quality that the Polish team has. Our service will be very important because their reception isn’t their strongest point. Our defence will be important as well. Despite our difficult situation, I believe in my team. We have intelligent young players and I am happy to have this opportunity to work with them. This duel will be difficult but very interesting and we are looking forward to it” adds the Montenegrin coach.

Looking at the line-ups of both teams and taking into account their potential and skills Asseco Resovia seems to be the favorite to win this semifinal, at least on paper. However RZESZOW head coach – Andrzej Kowal – together with the captain Aleh Akhrem stresses that at this stage of the competition there are no weaker or stronger opponents and every team is very motivated to reach the finals.

“I wouldn’t say that ACH Volley LJUBLJANA will be an easier opponent for us than Fenerbahce ISTANBUL, the team that we edged in the Challenge Round. Maybe the Slovenian team is not as star-studded as the Turkish champion but definitely it’s not an easy rival to beat. At this moment there are not easier or more convenient opponents. ACH Volley has a good, solid team. Their roster changed a bit comparing to the team which we defeated twice in the Champions League two years ago but generally this club has stability and consistency. Their results in every competition show that they are playing really good which means that we have to give our best and play at our highest level in order to defeat them. Moreover, we have to keep in mind that the return game will be in Ljubljana in front of a hot Slovenian public and we remember that it’s not easy to play there” emphasizes Kowal.

“In my opinion ACH Volley LJUBLJANA is a very good team with experience in playing European Cups. It doesn’t make any sense to reckon that we are favorites of this duel as we can’t underestimate any opponent at this stage. The Slovenian team is capable of playing good Volleyball and they proved that a couple of times. I’m sure that ACH Volley is aiming to play in the finals of CEV Cup and they will be very determined to gain the promotion to the next round. Thus, we have to be ready for a hard battle. I believe that in the first leg, in front of our fantastic supporters, we will manage to get a satisfactory result. For sure we are also very motivated and would like to play in the finals but I don’t want to promise or declare anything. This is sport so anything can happen” adds the captain of Asseco Resovia, Aleh Akhrem, who claims that the schedule of the games is unfavorable for his team.

“The fact that we play the second leg in Slovenia is definitely disadvantageous. I always say that teams which play the return game at home are in a better position because in case of a draw in two games the decisive golden set will be played at their venue. Our duel in the Challenge Round against Fenerbahce showed that the home advantage in the return game is crucial and we took benefit of it. Moreover, from my experience, as we played in Ljubljana two years ago in the Champions League pool round, they have a very hot atmosphere at Tivoli sports hall with a lot of fans so it won’t be easy for us to play there. We have to be focused and we do not have to lose our mind until the end of the competition” singles out the Belarusian player.

“We are looking forward to the second match in Tivoli because the match in Poland practically won’t count. The return game in Ljubljana will be crucial and we are aware of the fact that our home fans can create a fantastic atmosphere. We will give our best in Rzeszow and won’t give up but we are already looking forward to Saturday game at Tivoli” ends Andrej Flajs, the captain of ACH Volley LJUBLJANA.

ARG M: Continuation of 3 matches of Play Off