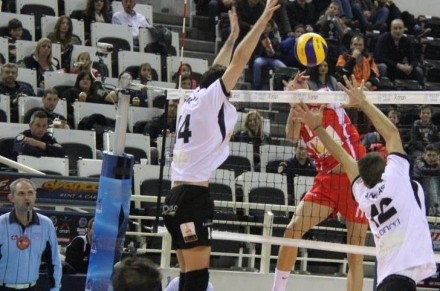 “The team was tired and all these problems show that the players’ bodies are exhausted,” Olympiacos’ coach Dimitris Kazazis said.  “It is not easy to allow them the time for some good rest.  If we rule out the first set, we played well and took a great victory.  I do not feel pressure.  It does hurt my players not to be given the deserved credit for their victory over Russia’s Guberniya NIZHNIY NOVGOROD in the CEV Volleyball Cup match.  The team is within its goals, whether some like it or not.  We may be having a bad day, but we are moving on…”

Olympiacos currently occupies the fourth position in the provisional ranking of Greece’s domestic league, trailing only two points behind leader Ethnikos ALEXANDROUPOLIS after the latter’s surprising 0:3 (22-25, 23-25, 17-25) loss at home to Panathinaikos ATHENS.  Another 15 points behind, PAOK takes the eighth place.