In a duel of the two unbeaten sides in the 2019/20 Italian Men’s Volleyball Championship, Cucine Lube Civitanova have proven too strong for Allianz Milano. 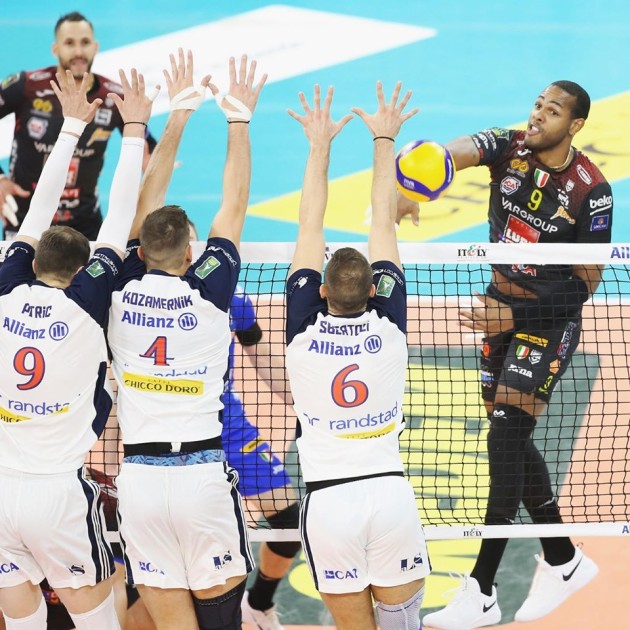 Although they did not know who will play on the position of a setter even a few hours prior to the match against Milano, the champions Lube swept Milano in Round 2 of the 2019/20 SuperLega Credem Banca regular season to improve the record to 3-0 and break the invincibility of rivals: 3-0 (25-22, 25-15, 25-20). Stijn D’Hulst returned from Belgium where he had gone for his father’s death just before the game to fill the place of a setter that was vacant due to the slight injury of Bruno Rezende “Bruninho“. Brazilian did enter the court after all but did not play much as he was kept out by the head coach De Giorgi for the Super Cup that starts on Friday. Milano was also weakened because Alletti, their other starting middle blocker beside Piano, also could not play. He was blocked by the doctors, while Piano will miss the entire season due to ACL injury. Interestingly, Milano head coach Piazza decided to put French outside hitter Trévor Clévenot to perform as a middle blocker. Osmany Juantorena top-scored for Lube with 17 points, including 4 aces. Milano’s main weapon Andel-Aziz underperformed (13 points, 38% attack, 12/32). Serbian Nemanja Petrić was Milano’s top scorer with 14 points through notable attack success rate of 70% (14/20).

Sir Safety Conad Perugia regenerated after a loss to Milano, only three days ago, and dominated Calzedonia Verona despite playing without Podraščanin who was out due to a back problem. Serbian Aleksandar Atanasijević chipped in 17 points (8 points and 89% in the attack in the second set!) for Perugia, while French Stéphen Boyer made 14 for Verona.