Gian Luca Pasini wrote in his blog that Itas Trentino are close to hiring bombastic Brazilian-Dutch duo for the next season! 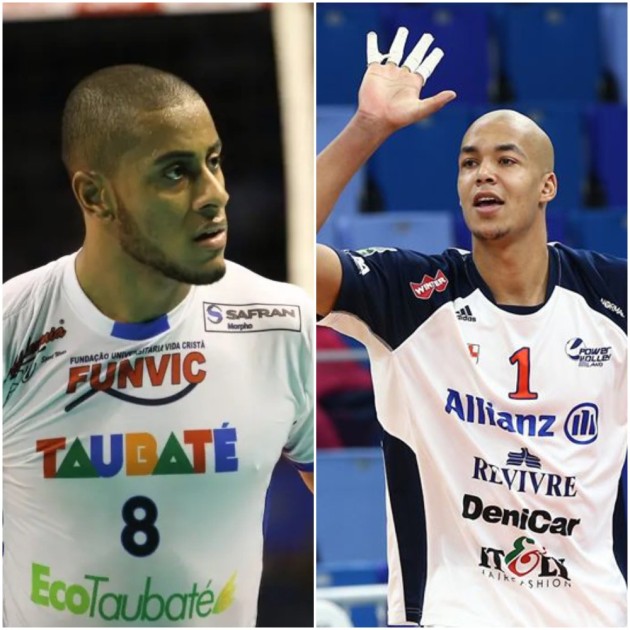 According to the information of Gian Luca Pasini, the Italian side Trentino might have a bombastic duo in their roster next season: Lucarelli – Abdel Aziz! The serious financial crisis of EMS Taubaté Funvic will probably result in the departure of many players of Brazilian champions. Some of them will stay in the country but some might leave. Actually, Trentino already sent an offer to their outside hitter, the 2016 Rio Olympics winner Ricardo Lucarelli.

But, the more striking rumor is that Trentino contacted the best scorer of SuperLega, Nimir Abdel-Aziz. The Dutch opposite hitter is projected to replace Luca Vettori. Abdel-Aziz has a valid contract with Allianz Milano for one more season but the termination clause is affordable. The Japanese club, whose name is unknown, is also in the contention for his signature.

If these rumors are true then Trentino HAS to do everything to keep Lisinac and Russell. Having top 3 level players in middle (Lisinac), opposite (Nimir) and outside hitter (Russell) positions would be enough to push past Lube. Lucarelli is very very good still not the player he was before the Achilles injury. His experience is top notch.
Perugia has to make a play to get another top outside hitter to replace Lanza who is a weakspot.
Modena may not be as complete.
Milan????
Things are getting interesting.

Re: @Suisse It would be interesting to see how would Nimir play in a team where he is not getting the majority of balls. Your comment assumes that Trentino will get rid of MVP of last Europian championship and best outside hitter of Italian league last season, Kovacevic.
Lanza is definitely the weak spot, Perugia needs 1st class outside hitter. Maybe Russell will go back

Re: @former_player
Those are excellent points. I feel for Kovacevic and admire him as a player, but he disappointed in big matches in the playoffs last year and has been struggling with injuries and motivation this year it seems. Russell has become a leading force for this Trentino team this year.
The Perugia – Russell return is an interesting thought if Perugia has enough foreigner room. I am curious who will set that team.
What is going on in Milan? Very quiet

Re: @Suisse Kovacevic is a very unique type of player. Lefty, look and move awkwardly, but somehow get the job done. He is struggling with injuries for the last few months but I wouldn’t count him off. Don’t forget that he was the one selected as the best outside hitter of the last Italian championship along with Leon.

Perugia has 8 foreigners, 4 can be on the court per regulations. Leon, De Cecco, Atanasijevic and Podrascanin are current four. De Cecco is not the calibre of setter required for the top. Podrascanin is not playing as he used to do, not sure if it’s age-related since he is only 33. They can make room for Russell if they want.
Not sure why are you keep mentioning Milan who is in the second tier of Italian championship along with Verona, Ravenna, Padova. Big four are Lube, Modena, Trentino and Perugia. Modena is raising their game, 3 US national team members plus Zaytsev and Bednorz are playing better and better. They will be the biggest contender for the title beside Lube.